St. Beryl of Krakow was an early (5th Century) Christian martyr. Forcibly married to the pagan Duke Casimir, Beryl maintained her all-important virginity by ceaselessly talking to him and incessantly chattering on, until he went down with a headache.

Eventually he couldn't stand the eternal wittering any more and had her executed, but she died a virgin, which in Christian eyes was the all-important thing and which secured her a sainthood.

The Chattering Order of St. Beryl are an order of nuns dedicated to emulating her example, and whose members are commanded to chatter, natter, and rabbit on about every last little thing that comes into their heads for every second of every waking hour. Sister Mary Loquacious is a Living Rule of the order.

She is also a practising Satanist, as this order of nuns has been very thoroughly and completely infiltrated and compromised over the years. Like most Satanists, she is not especially evil in herself, much though she diligently strives to be, but she plays a part in the baby-swapping that finally delivers Adam Young to Tadfield...

The Sisters are allowed half an hour's respite on Tuesdays, when they may be silent and, if they wish, play table-tennis.

The Sisters play a key role in Good Omens.

Comedians Peter Cook and Dudley Moore created the Leaping Order of St Beryl first for their 1960's TV programme, Not Only...But Also, and expanded the sketch for their 1967 film Bedazzled. In the film, Peter Cook's Satan tempts Dudley Moore's Stanley, playing on his love for unattainable cafe waitress Margaret (Eleanor Bron). Stanley sells his soul to be with Margaret for ever by her side in perfect peace and harmony. Satan obliges... by turning them both into nuns in the same convent. Here, the Sisters are urged to emulate Beryl by praying and praising God whilst simultaneously performing acrobatic flips on the trampoline...

The original 1967 movie, very good in parts and in others patchy, is under no circumstances to be confused with any alleged remake coming out of Hollywood and starring the exceedingly wooden Liz Hurley in the Peter Cook part, Gods and Demons help us. 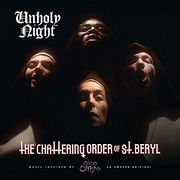 The Order made their online presence known in 2019, sometime in conjunction with an event in Tadfeild in May of the same year.