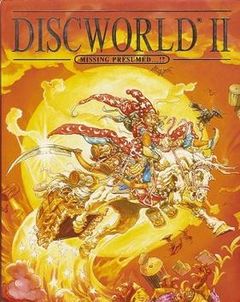 Discworld II: Missing Presumed...!? casts players again in the role of Rincewind, from the first game.

Gameplay is divided into 4 Acts. There are many locations to explore and a multitude of obstacles in Rincewind's path to overcome. Conversations with characters and interaction with inventory objects is necessary to move ahead.

The game features unique humour similar to the previous game.

In Discworld II the player controls Rincewind the "Wizzard", who has been burdened with the task of coercing Death out of his impromptu retirement and back into his regular duties. The game borrows from a number of Discworld books, but the plot is essentially a mesh of Reaper Man and Moving Pictures.

In a dark Ankh-Morpork street, Rincewind and The Librarian witness the Fool die in a nearby cart-bomb explosion. Meanwhile, at the Unseen University, the party in honor of Windle Poons imminent death is spoiled when Windle's soul fails to leave his body after he dies. This latest in a series of incidents of the newly dead lingering about prompts the Archchancellor to summon Rincewind and task him with finding the mystic items needed to summon Death.

Once summoned, Death reveals to the wizards of Unseen University that he is on indefinite vacation, having grown disillusioned with the thanklessness of his task. The Archchancellor tries to argue him to return to work, but the summoning spell wears off and Death vanishes. The Archancellor orders Rincewind to find Death.

After tracking down Death, Rincewind presses him for something that will change his mind. Death replies that he wants to become popular and "wanted". Rincewind decides to try making Death into a star of the newly-emerging film industry, and employs Cut-Me-Own-Throat Dibbler as director. Dibbler tells him that for the film to be a success, he needs an attractive actress, a theme song, and some novelties. While collecting these essentials, Rincewind also takes some footage of the Elf Queen as reference material for Death's makeup girl.

Dibbler's film is finished and premieres to highly negative critical response, as it consists solely of a few close-ups of Death and footage of an irate actress pushing the camera away from her, played in an endless loop against the theme song. To save the movie, Rincewind edits the film to include individual frames of the Elf Queen footage scattered throughout in a subliminal tactic. The Elf Queen's hypnotic gaze causes viewers to be enamored of the film, and Death becomes an instant star.

However, Death is so pleased with his new success that he opts to continue in his celebrity rather than return to work. This leaves Rincewind no choice but to take up the job of death for the time being. Death's butler Albert is displeased with the notion of anyone being a substitute for his lifelong master, and sets Rincewind a series of tasks to prove himself worthy of the role. Rincewind is successful at these and becomes the new death.

After collecting the souls of a thousand deceased ants, Rincewind's next assignment is Death himself, who was killed by an assassin hired by the Patrician. Not wanting the job of being death for all eternity, Rincewind saves Death by pouring some fresh sand into the hourglass of his life.

At the showing of Death's next film, Rincewind again splices in some Elf Queen footage. The film suddenly comes to life and the Elf Queen emerges in giant form, seizes The Librarian, and climbs the Tower of Art. Rincewind flies after her with a borrowed witch's broom, knocks her off with some water balloons, and saves The Librarian. Windle Poons, who was watching the scene from below, is crushed by the Elf Queen's bosom. Death, having returned to his duties, appears to sever Windle's soul from his body and guide him to the afterlife.

The game, on two CD-ROMs (one for the console versions), features hand-drawn environments and animations, full voice acting and a simple interface. Though the game does not run on XP systems onwards, the game can still be played on modern systems with the ScummVM or DOSBox emulators. ScummVM can take the real game data such as scripting information or scenes, and collate them together displaying it all on its own version of Discworld 2‍ '​s Tinsel engine.

A number of changes were made to the voice cast since the previous Discworld game. While Eric Idle reprised his role as Rincewind, Tony Robinson did not return, and Jon Pertwee died before production could begin. Rob Brydon and Kate Robbins did return, however, and Young Ones actor Nigel Planer was added to the cast. The Death of Rats is voiced by "Katharine the crocodile", and Rob Brydon seemingly provided the new voices for Dibbler, Windle Poons, the Patrician, Chuckie and the Fool.