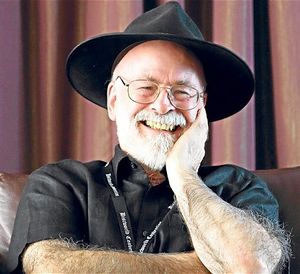 Sir Terence David John Pratchett, OBE (let's acknowledge it here, just once, but hereinafter, I'm sure he won't mind if we leave it as plain Terry?) a prolific British author of comedy fantasy (28 April 1948 – 12 March 2015).

In 1995 Terry had a fossilised species named after him Psephophorus terrypratchetti, fittingly it's a turtle.

Terry Pratchett on Desert Island Discs, 1997. Episode on the BBC Website, and the music chosen.

In 2007, Terry Pratchett suffered a mild stroke, resulting in the ability to recall the lyrics of advertising jingles from 40 years ago and the inability to knot a tie. This diagnosis turned out to be inaccurate, however. On 11 December 2007, Terry announced that he had been diagnosed with a rare form of early-onset Alzheimer's disease.

At the end of the announcement he writes, "I will, of course, be dead at some future point, as will everybody else. For me, this maybe further off than you think - it's too soon to tell." Terry later collaborated with the BBC to produce a documentary expanding on his experience with the disease, Terry Pratchett Living With Alzheimer's.

Terry also filmed Terry Pratchett: Choosing to Die, a documentary on euthanasia. In it he interviews several people with incurable conditions who are considering, or have considered, choosing the point of their own death. He also investigated Dignitas, a Swiss group who helps those with terminal or severe illnesses to die. Peter Smedley, hotelier and millionaire, allowed himself to be filmed consuming a barbiturate solution in order to end his own life.

Terry wrote dialogue and made multiple suggestions for a Mod, Companion Vilja, for the PC game The Elder Scrolls IV: Oblivion. 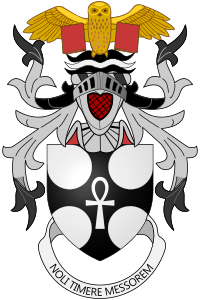 In celebration of his knighthood Terry forged his own sword, as a real knight needs one of course. Terry forged it using with help from a local blacksmith using iron mined from a field near his home and pieces of meteorite, in a kiln that?he built himself. According to Rhianna Pratchett the sword was christened 'Thunderbolt Iron.'

Sir Terry passed away on the 12th of March 2015 leaving behind a huge legacy. A memorial in his honour was held on the 14th of April 2016 at the Barbican Theatre in London. The event was attended by friends, family and fans, notable speakers included his daughter Rhianna Pratchett, Rob Wilkins, Neil Gaiman and Tony Robinson. There was music by Steeleye Span and Eric Idle via video. There were several announcements to showcase that although Terry had shaken hands with death his work would continue and his legacy was in good hands; these included a biography on Terry by Rob Wilkins, Television adaptations of Good Omens by Neil Gaiman and The Watch TV Series by Narrativia, a movie adaptation of The Wee Free Men by Rhianna Pratchett and more. Sir Terry is gone but not forgotten.

A man is not dead while his name is still spoken. Speak his name.

The phrase GNU Terry Pratchett, in reference to Going Postal, has became popular as a tribute by fans to the author. The phrase has since been incorporated into web coding in order to keep his name being spoken over the internet in the same manner as it is used in the novel.