GURPS Discworld is a role-playing game, in the form of several source-books, that allows players to set quests in the Discworld Universe.

The Generic Universal RolePlaying System, or GURPS, is a tabletop role-playing game system designed to allow for play in any game setting. It was created by Steve Jackson Games and first published in 1986 at a time when most such systems were story- or genre-specific.

Players control their in-game characters verbally and the success of their actions are determined by the skill of their character, the difficulty of the action, and the rolling of dice. Characters earn points during play which are used to gain greater abilities. Gaming sessions are story-told and run by "Game Masters" (often referred to as simply: "GMs").

GURPS won the Origins Award for Best Roleplaying Rules of 1988, and in 2000 it was inducted into the Origins Hall of Fame. Many of its expansions have also won awards. In 1998 GURPS adapted Discworld for its system.

GURPS Discworld was written by Phil Masters and Terry Pratchett. Cover and illustrations were done by Paul Kidby. It was published by Steve Jackson Games in 1998. GURPS Discworld was the first book to include GURPS Lite in it (a condensed version of the game rules). The GURPS Lite rules were included as an appendix, meaning it was not necessary to purchase the rulebook GURPS Basic in order to play.

The original book was republished in 2002 by Steve Jackson Games with the GURPS Lite rules integrated throughout the text. The title was changed from GURPS Discworld to Discworld Roleplaying Game to reinforce its stand-alone capabilities. Illustrations were once again done by Paul Kidby. This publication was labelled "Powered by GURPS" without including "GURPS" in the book title, primarily to make it easier for fans to find the books at mass-market retailers. 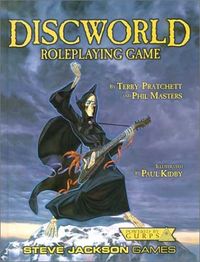 In March 2001, Steve Jackson Games published a sequel under the title GURPS Discworld Also. It was written by Phil Masters, again with the assistance of Terry Pratchett. Cover and illustrations were done by Sean Murray. The supplement covered recent events in the book series, including details about the Unseen University. Among the scenarios included is EckEckEcksEcksian Cart Wars, based on the Mad Max parody segments of The Last Continent and Steve Jackson Games' own Car Wars and GURPS Autoduel setting. It also included the first detailed rules for mechanical semaphore telegraphy, based on the "clacks" network in the books.

This version shares its name with the reprint of the first GURPS Discworld, and is labelled as a second edition. This book combines both previous books into one volume and adds further information, updating to include information from all the novels up to Snuff and companion books up to Turtle Recall.

Additional gameplay scenarios, rules, and other ideas that could be used in conjunction with the game were written by Phil Masters and Terry Pratchett. Some were contributions by other people. These were mostly published in various magazines that were related to GURPS and Steve Jackson Games, they were then republished online on the Pyramid Website.