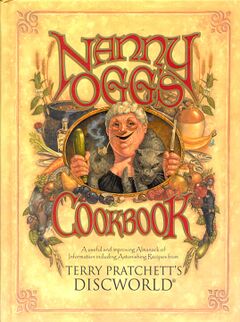 They say that the way to a man's heart is through his stomach, which just goes to show they're as confused about anatomy as they gen'rally are about everything else, unless they're talking about instructions on how to stab them. Anyway, we do not have a perfect world and it is foresight and useful for a young woman to become proficient in those arts which will keep a weak-willed man from straying. Learning to cook is also useful.

Nanny Ogg, one of Discworld's most famous witches, is passing on some of her huge collection of tasty and above all interesting recipes, since everyone else is doing it. But in addition to the delights of the Strawberry Wobbler and Nobby's Mum's Distressed Pudding, Mrs Ogg imparts her thoughts on life, death, etiquette ('If you go to other people's funerals they'll be sure to come to yours'), courtship, children and weddings, all in a refined style that should not offend the most delicate of sensibilities. Well, not much.

Most of the recipes have been tried out on people who are still alive.

Nanny's earlier work, The Joye of Snacks (mentioned in Maskerade), which (as it's parodic title would imply) contains recipes that help enhance eroticism, has apparently not yet crossed over into Roundworld, unless it's become a chapter in this book? The simple answer to this, as Nanny is at pains to point out repeatedly, is that she simply isn't allowed to and that having to compromise her artistic vision has left her somewhat miffed.

The Cookbook has several strands, all of which parody aspects of Roundworld publishing as well as specific literary genres. (Oh, and the recipes also work: Mrs Colon's Genyooin Klatchian Curry is a plateful of culinary nostalgia, for those who ever ate Vesta packet curry in the 1970's).

It opens with an exchange of memos between the publisher JHC Goatberger and his managing editor ("Overseer") Mr. Cropper, in which we learn that the print house of Goatberger's is in dire straits following a series of ill-judged editions which have left it with substantial liabilities (and possible legal actions) rather than the much-hoped for profits.

At this point, salvation arrives in the form of a manuscript from the Lancre Witch which is meant to be a follow-up to her best-seller The Joye of Snacks. This deals largely with etiquette, comportment and good manners, and indeed a goodly amount of this material makes its way into the final book.

Goatberger and Cropper ponder the ethics of publishing a book clearly plagiarised from at least twelve sources. Then they decide it can be considered "research" and publish anyway.

The book takes the form of severely abridged recipes purporting to be from the Joye of Snackes, with, as its author complains, "all the best ingredients left out". The presentation is reminiscent of one of those charity compilations which hit the bookshops like a rash just before Christmas, in which vaguely famous or at best notorious people are asked to submit their favourite cat/dog/recipe, et c, for charidee. This would explain why such luminaries as Havelock Vetinari, Patrician, and Lady Sybil Vimes have lent their time to support the book. Although on what promise or premise from Goatberger is not clear, as we know the charity being supported is the Keep Goatberger Solvent Benevolent Fund. (Then again, we have no idea how much of the money from those Christmas charity compilations goes on "publishers' expenses" before the charity sees a penny).

Other contributions, such as those from Mrs Fred Colon and Maisie Nobbs have a more personal feel to them, as though Nanny Ogg has been out and done the fieldwork personally.

The sections on good manners and etiquette are an outrageous parody of those books of the "Edwardian Country Gentlewoman" genre, for which there was a vogue some years ago.[1] (American readers: think Emily Post).

Annotation, or at least a puzzling anachronism

On page 140, there is a short entry on The Significance of Stamps, in which Nanny Ogg discusses the hidden language connected with where, exactly, the stamp is placed on the envelope (top-right, "the answer to your question is "yes""; top left, "don't waste your time, boy", dead-centre, "you've stamped it right over the address so it ends up at the wrong house", et c. Nanny tells us that this goes back a long way.

Yet on the Disc, stamps as we know them are the fairly recent invention of Moist von Lipwig and Stanley Howler? So how can this be explained, unless Lancre, uniquely, has been using them locally for a long time?

(Or could Nanny, inspired by seeing an Ankh-Morpork stamp, just have made it all up - well, all time-honoured traditions have to begin somewhere - to fill in space and meet a publishers' deadline?)