Difference between revisions of "Chrysoprase"

Chrysoprase (also known as Krysoprase in The Light Fantastic, and Chrystophrase in Wyrd Sisters) is the de facto leader of the trolls disorganisation, the Breccia. Generally accompanied by several of his thugs (not henchmen, they're not smart enough to hench), Chrysoprase is a feared and well-known presence in Ankh-Morpork.

In the revealed outline for Scouting For Trolls, we learn that he was, as a pebble, a Boy Scout, as Trolls understand the word. As a respectable businesstroll and community representative engaged in good works and charitable donations, he is keen to sponsor an expanded operation with a similar philosophy, aimed at the young people of all sentient races. This is despite the origins of the movement lying in the age-old animosity between Trolls and Dwarfs.

Recently, Chrysoprase has been moving out of the troll-drug trafficking trade (in Feet of Clay), and into "property and financial services" (in Thud!), or so he claims. To his merit, he dislikes trolls fighting among themselves (he'd rather have them all working together and fighting dwarfs - later on, he appears to disapprove of even the latter, going out of his way to show that he has nothing to do with the rabble-rousing towards dwarf/troll conflict, on the grounds that it is bad for business), and has great belief in showing respect (particularly to him). Disrespectful thugs rapidly become rockeries and jewellery. He also respects Commander Vimes for being unbribable and honest.

Chrysoprase also owns The Cavern Club, a nightclub frequented by the cooler types of humans and the nastier types of trolls. He also wears suits, a rare idiosyncrasy for a troll. They fit badly, but that's what happens when trolls wear suits.

It has been rumored that the diamond jewelry that Chrysoprase wears is made from the teeth of other troll gangsters "who have come second in their business dealings with him" (see The Discworld Companion).

The name Chrysoprase has been given in the fine tradition of naming trolls after minerals, rocks, gemstones, or other geological formations. Chrysoprase is an apple-green to dark green variety of chalcedony (a fibrous rock composed of quartz). It is one of the most prized varieties of quartz. This may also be a reference to his role as a "ton" as both the parts that make up his name are associated with money.

Chrysoprase has a named nephew, Jasper Chrysoprase, famed as the first Troll pupil to be accepted by the Assassins' Guild School. 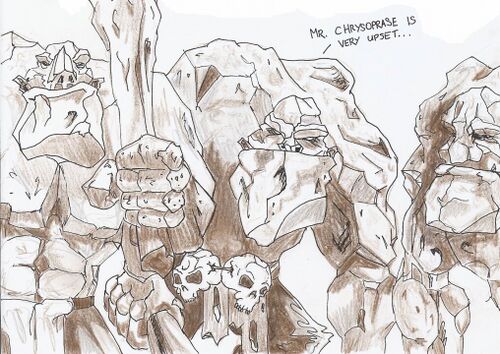