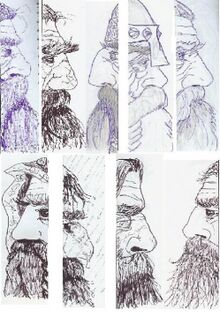 Dwarfs love gold, but love iron more, possibly because gold can only be made into jewellery, while iron can be used for making many types of useful tools and weapons. Regardless of this, dwarfs seem to always sing about gold when they sing at all , which they do a lot while drinking in pubs, because the word "gold" makes the chorus easier to sing. There are probably many variations; their vocabulary regarding minerals is extensive to the point they lack a generic word for simply "rock". Silver is also a valuable commodity in the Dwarfish economy:- as well as its uses in jewelry and trading, the metal has an extra significance in Überwald where it almost has the status of a weapon of war (or at the least, the sort of pointed diplomacy that often takes the place of war).

As Terry Pratchett's books have become more and more elaborate in the recent years the description of the dwarf race has become more and more believable. In the early books (Guards! Guards!, Wyrd Sisters) the dwarfs were little more than a caricature of the Disney dwarfs singing the Hi-Ho song. However, especially in the more recent Thud! the dwarf race has been described as an ancient race which is almost immobilised by the large amount of history and traditions. Many (but luckily not all) dwarfs have a problem with fitting into a modern world, where many of the old traditions have become obsolete or plain wrong.

Traditionally, dwarfs are miners in the mountains (nowadays there are also dwarf artificers, jewellers, bakers, Watchmen, etc. in the cities). The dwarf language sounds like someone needs a cough drop after eating too much grit in the mine.

One dwarfish word that is very badly translated when talking to humans is "king," which to the dwarfs means; "senior engineer of the mine," there is little connotation of royalty or god-given right to reign. The dwarf Low King is elected by the senior members of the more powerful mines, and acts as the final court of appeal in disputes. The Low King's seat is in Bonk, Überwald, but it is rumored that dwarf mines are connected underground for miles and miles across the continent.

In the old days, Überwald dwarfs were often dinner to vampires and werewolves, just as humans were; also dwarfs warred against the trolls. This is where that silver stuff comes into it: for quite a long time in Überwald, the Agreement between Dwarfs and Werewolves was: "You agree not to eat us, and we agree not to mine and refine any more of that precious metal that can so spoil a werewolf's digestion, especially for eg if forged into mail shirts and used to edge weapons."

However, in the time of the events in The Fifth Elephant, this Agreement breaks down mainly due to the machinations of Wolfgang von Überwald, and silver mining resumes. A silver mailshirt which must be a long-treasured family heirloom travels to Ankh-Morpork with Cheery Littlebottom, because her family have heard there are werewolves in Ankh, and they reason she is likely to need it more than they do.

Very likely due to the mine networks, dwarfs have come to be one of the three major political powers in Überwald (see The Fifth Elephant). There is a rivalry between these Überwaldian dwarves and those from the Copperhead region. Some Überwaldean dwarfs also want to excommunicate all city-dwelling dwarfs.

Traditionally, all dwarfs dress the same and act the same – quaff beer, sing about gold, wave a pickaxe or battleaxe at people when drunk. Samuel Vimes notes that, despite being generally sober and hardworking, dwarves - especially those in his city - with extra leisure time are generally much too rowdy and cantankerous for his comfort.

The dwarf race is not religious. However, tradition is held onto in a nearly religious way, and there such a thing as mine sign which is the subject of much superstition.

The dwarf language is rich and expressive and universally spoken by all dwarfs. Very few non-dwarfs speak it, still less with fluency, and these are generally those who have professional doings with the race, such as Watchmen and bullion dealers. Even these people, and dwarfs speaking Morporkian, must invert their thinking. To dwarfs, low is the human equivalent of high. Thus the Low King, and the confusion when you ask a dwarf if he wants to get in on the ground floor of your latest business venture.

There is no female style of clothing or female pronoun; there are no female names in dwarfish. Both male dwarfs and female dwarfs naturally have beards and it has never occurred to any dwarf to shave, and thus doing so is considered undwarfish and shameful. The gender of a dwarf is only revealed to those concerned, during courtship, when at age two hundred the concerned parties are deemed mature enough to handle it without giggling (gender not being considered important by most dwarfs compared to things such as metallurgy and hydraulics). An interesting implication of this custom is that there is no gender discrimination when a dwarf seeks a job position or tries to make a career or open a business.

Forensics Watchdwarf Cheery Littlebottom clarifies this superficial equality by explaining while dwarf women are allowed do anything men can do, they are expected to only do those things; acting "female" has less to do with sexism and more to do with acting undwarfish. When she started wearing makeup, leather skirt (very plain-styled), and an armor that is modified in the chest region, a cultural revolution began (see Feet of Clay), leading to much internal conflict in dwarf politics. Nowadays, traditional-minded dwarfs hate not only openly female young dwarfs, but also dwarfs who spend too much time in the sun and cooperate much with humans or tolerate trolls. To traditional-minded dwarfs, a dwarf's proper place is deep underground in a mine. Dwarfs have a natural lifespan of several hundred years, so they have a lot of time to get set in their ways and fuel old feuds. (See The Fifth Elephant and Thud!.)

For an explanation on the dwarfs' traditional enemy, consult the articles on the trolls and Battle of Koom Valley; a severe confrontation is described in the book Men at Arms. It could be that, as of Thud! a truce is in the air as the current Low King Rhys Rhysson and Mr. Shine the Diamond King of the trolls have arrived at a parley to which many of leaders of the most senior dwarfish and trollish clans are abiding. Some of this is based on the new reading of the Gd Tak `Gar, and some of it is based on right-thinking individuals sweeping back the tides of enmity that are millennia-old.

The dwarf language is complexe and while it can be spoken by humans, it does sound like you have a throat full of gravel.

Dwarves have a detailed rune alphabet used for important records and documents, though many are able to read human script as well.

Terry Pratchett has fuelled lots of mirth and travelled many miles on all the things that may be extrapolated from just one line of J.R.R. Tolkien's The Lord of the Rings.

The dwarf Gimli is on record as having dismissed the fallacious legend that there are no Dwarf-women and therefore the race were born by being hewn from living stone: "It was said by Gimli that there are few dwarf-women, probably no more than a third of the whole people. They seldom walk abroad except at great need. They are in voice and appearance, and in garb if they must go on a journey, so like to the dwarf-men that the eyes and ears of other peoples cannot tell them apart. This has given rise to the foolish opinion among Men that there are no dwarf-women, and that the Dwarves 'grow out of stone'." (LotR, Appendix A, III). In another posthumously published text it is also stated that "the Naugrim[Dwarves] have beards from the beginning of their lives, male and female alike" (HoMe 11: The War of the Jewels, "Of the Naugrim and the Edain").

As TP has pointed out, this means that Dwarf females must also be heavily bearded and beweaponed, and also favour the chainmail-and-leather casual look.

Leading us ultimately to Cheery Littlebottom...