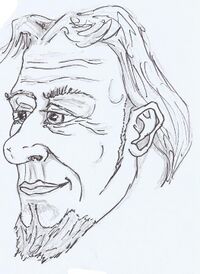 One of the very competent, slightly thuggish individuals hired by Mr Teatime in Hogfather to help him reach, enter and desecrate the Tower of Teeth. Turned out he was very competent at dying in his own head as he is effectively destroyed by his own imagination.

By the hardly educated standards of Ankh-Morpork's society of the differently legal, he was considered an intellectual. This largely had to do with have proper spelling for his tattoos and his concern for his less intelligent brother, Banjo.