This is the conference room at the Patrician's Palace. It has a unique fresco of dancing rats on the ceiling, rat wall paper, rat carpet, and so on, which has the effect of making people feel as if they need a wash after a few minutes (see Feet of Clay).

Well, Lord Vetinari wouldn't want people to feel comfortable whilst discussing City business, would he? This room is used for meetings between City leaders, Guild Presidents, and the heads of the Ankh-Morpork noble families. 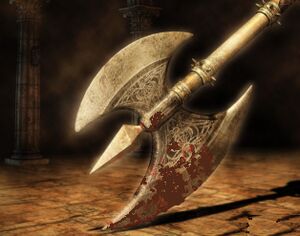 While this room was used for plotting as to who should succeed Vetinari as Patrician, a person or persons unknown gate-crashed the discussion and wordlessly buried a very large axe in the centre of the table, nearly splitting it in half. While nobody is prepared to accuse--and Commander Vimes is careful not to admit to anything--this is thought to be a reference to the way the rule of King Lorenzo the Kind was ended, and a strong reminder that this method might be considered again in the future.

Vetinari is happy for the axe to remain embedded in the table, as he considers it an amusing object--which gives a nice resonant twanging noise if the handle is plucked--and an interesting conversation piece to bear in mind at meetings.

Wherever there is corruption, there is the axe. There is always the axe...

The Roundworld reference is to the Star Chamber of Elizabethan England, where the most powerful Lords of the Realm (known as the Cabal) discussed matters pertinent to England's power and prestige. In later years, under James 1st and Charles 1st, the room was used for loyalty hearings and interrogation of suspected traitors. This had a ceiling fresco of stars and celestial bodies.

It is possible the Rats Chamber was originally meant to be something broadly similar, but the instructions for interior decoration involved a dyslexic ruler instructing a literal-minded painter, or vice-versa. Yet another example of an inherited object, initially one of those little accidents, now serving Vetinari's purposes. The name is possibly also a play on the German word "Rat" meaning council, such as is Rathaus or Ratsstube.

The ceiling of the Rats Chamber depicts a ring of dancing rats, their tails intertwined in the center. See The Amazing Maurice and his Educated Rodents for this image's folkloric significance.