Rincewind has been an important character since the Discworld series started. He is a polite yet cowardly wizard with (almost) no magical ability and whose ambition in life is simply to continue having a life. He has been on many adventures, but almost entirely by accident. He is however gifted with languages, speaking several including Chimeran, Vanglemesht, Sumtri, Black Oroogu, High Borogravian and beTrobi.

He starred in The Colour of Magic, The Light Fantastic, Sourcery, Eric, Interesting Times and The Last Continent, and was also a major character in the graphic novel, The Last Hero as well as in The Science of Discworld novels. He was born under the "Small Boring Group of Faint Stars", a sign associated with chess board makers, sellers of onions, manufacturers of plastic images of small religious significance and people allergic to pewter. Rincewind became the owner of the Luggage after it was given to him as a present by Twoflower in The Light Fantastic.

He has a particular attraction to potatoes, and has in his time been mistaken for a demon, a god, lunch, a hero, a woman, and many other things. At one point he even very briefly visited Roundworld, appearing on an aeroplane mid flight as Dr. Rjinswand, a nuclear physicist, in The Colour of Magic.

Rincewind's magical ability is almost nonexistent. He never passed an exam at Unseen University. The highest score he received was 2% for spelling his name right. In fact, we are informed that he actually managed to receive negative marks in Basic Firestarting, an issue still hotly debated by the Faculty - "How the Hell did he manage that!" - even in the early pages of Interesting Times. Even when we first met him however he still had the right to wear the brass octogram confirming he is a UU alumnus.

It has been estimated that when Rincewind finally dies, the average magical ability for the species will go up a fraction. What he cannot spell right, apparently, is his job description, because he has WIZZARD written in large letters on his pointy hat. The reason for this incompetence lies within an incident where he opened the Octavo and one of the great eight spells of the creator jumped out and settled down in his brain. This spell frightened off any other spells which Rincewind tried to learn.

Nevertheless, he has managed to do some impressive magic on very few occasions (e.g. in The Light Fantastic), most often without his consent, although once near The Light Fantastic's climax, he was able to mentally unlock a door through apparently no efforts or powers but his own, (albeit at great strain.) (This interestingly echoes another magical misfit, Magrat Garlick, who similarly forced a thick unyielding door to open to her by using the power of magic)

Not much is known about Rincewind's early life. In Interesting Times, it is mentioned that "Rincewind had no personal experience of either parent." He has stated on more than one occasion that his mother "ran away before he was born (is there a possibility his mother just ran away from home to have Rincewind and Rincewind is just looking for an excuse to be far away?)." However, Rincewind clearly remembers a birthday card with a Now you are Five... badge attached to it - which is the worst possible present anyone could receive at the age of six. He also remembers having had a stuffed toy lamb plush as a child, (mentioned in The Last Continent.)

In The Light Fantastic, Rincewind remembers his grandad telling him about Cohen, again implying he grew up without his parents. In the same book, Trymon obtains Rincewind's "precise place and time of birth," from university records, so that an astrologer can cast a horoscope, implying that there is some record of Rincewind's birth.

Rincewind, Trymon and the Librarian all attended the University at around the same time, and are presumably the same age. In Interesting Times, Rincewind remembers hanging around with Noodle Jackson when he, (Rincewind,) was a very young student, implying that Rincewind has spent much of his life at Unseen University. 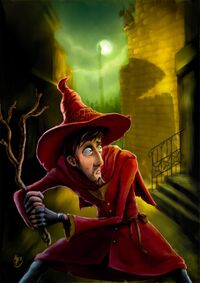 Rincewind must be one of the most travelled characters in the Discworld series. He has seen Hell, the Dungeon Dimensions, the end of the world and its creation (where he very probably started life with a discarded egg sandwich). He has been to XXXX, Klatch, the Agatean Empire, the Rim and all sorts of other interesting places. However, he probably cannot describe any of these places, because he was always running so fast that his feet barely touched the ground.

He seems to be constantly running away from danger (as such, most of his scars are on his back). He is the first to call himself a coward, although he's frequently frustrated by circumstances which cause him to be accidentally heroic. He always gets himself into dangerous situations, because he always has to help the helpless and innocent, even if half the time he would rather run away before it starts to happen to him. Also he is very realistic and rather cynical, so he knows when a situation is wrong and when, for instance, a bunch of poor foolhardy kids are going to get themselves killed (in Interesting Times).

He has been "almost" dead so often that Death calls Rincewind his hobby and does not actually know when he is going to die. Rincewind's life-timer has evolved in shape, much to Death's professional interest: far from resembling a simple hour-glass, it now manifests as a multi-dimensional glass nightmare, describing as having apparently been created by a glass-blower who had hiccups in a time machine. This is most likely due to his extensive dimensional and temporal travels while in constant fear of death. It is imposible to track the sand inside with any degree of accuracy, as occasionally it appears to move backwards.

Mentioned during the events of The Last Continent, Death has come up with a theory about Rincewind: He is aware that many cultures and civilisations have the concept of the Eternal Champion, the eternal, ever-renewed hero, the Champion with a thousand faces. As Death is unable to enlighten, even by default, on conditions in the next world , He generally refrains from commentating. Privately, though, Death is aware of the particular Discworld condition that every condition and state of mind must have its opposite - thus Drunk - Knurd, Crime - Anticrime, Matter - Antimatter, etc. He has wondered, as He regards Rincewind's unique life-timer, whether this belongs to the Eternal Coward, the anti-hero with a thousand retreating backs. Many cultures, after all, have the legend of an Eternal Champion who one day will be reborn in time of greatest need, (He even knows there is one in undying sleep underneath Lancre, and there certainly was one in Holy Wood.) It is possible that the balance of nature calls for an Eternal Coward who, when faced with waking up one morning to face down great threat, will pull the covers over his head and ignore the alarm clock.

After a failed career as a student, Rincewind was the UU library assistant for a while. He got on well with the Librarian, and might well be the person who knows most about the Librarian, apparently even his name.

Aside from running away, his single greatest talent is an innate gift for languages: He can scream for mercy in nineteen languages and just scream in another forty-four.

Rincewind is currently the Egregious Professor of Cruel and Unusual Geography at Unseen University, along with at least eighteen other positions that none of the other wizards wanted (see The Science of Discworld III: Darwin's Watch), such as Health and Safety Officer. His degree is B. Mgc. Unseen University (failed) (see The Colour of Magic, 2. The Sending of Eight, second paragraph). However, in the opening chapters of Interesting Times, Ridcully ascertains the truth in a clear and businesslike fashion. Rincewind has effectively been operating under false pretences and claiming a status for himself - as a full, graduate wizard - to which he clearly has no right.

While nobody is sorrier to have to point this out than Ridcully, the sanctions available under University lore for the punishment of imposters are quite clear-cut and offer no room for mitigating circumstances, and he, Ridcully, would be quite shockingly negligent in his duties as Archchancellor, if he did not order Rincewind to be nailed upside-down to one of the principal supporting pillars of the Brass Bridge at low tide.

After a pause to let this sink in, Ridcully then suggested that these things can be rectified and a retroactive honorary degree may be conferred if, for instance, a non-wizard in such an unenviable position were to go out and perform a great service of benefit to Wizards and all mankind, after which he, Rincewind, would be free to call himself a Wizzard, (and spell it with as many "z"'s as he likes).

Rincewind eventually conceded (in as many words) that Ridcully was being very fair-minded, under the circumstances, and consented to let himself be sent to the Counterweight Continent as the University's expeditionary force. It may be inferred from Rincewind's subsequent promotion to the post of Egregious Professor of Cruel and Unusual Geography that Ridcully has been faithful to his word and the honorary degree has been conferred, at last making Rincewind officially a wizard, albeit by a back-door route.

He is now also, quite reluctantly, a member of the "Unseen Academicals" football team.

Rincewind's philosophy on life is noted for its simplicity. He spends most of his time running away, and never particularly bothers with where he's running away to - what he's running from is always more important.

Rincewind is also firmly convinced that there are no causes worth dying for. As he sees it, you can pick up another five causes on any street corner, but you only have one life.

He views positive developments in his life with deep suspicion, reasoning that they are usually just a setup for some newer and more horrible fate to befall him. He is, almost invariably, correct.

As his list of misadventures has grown longer, Rincewind has grown increasingly cynical about how his own life works, and recently went so far as to volunteer for a suicidal mission to prevent the Silver Horde from blowing up the gods, because he figured he would end up on the mission anyway, either by force or by accident (as is probably true).

He feels he suffers from a sort of pre-emptive karma. The universe, as soon as something nice is about to happen to him, causes something awful to happen that not only balances out the good thing, but goes on happening right through the time during which the good thing is trying to happen, thus effectively blotting it out. It has been mentioned that there is possibly an anti-Rincewind to which only good things happen. Rincewind would very much like to meet him, preferably while holding a big stick. This may or may not be Bill Rincewind.

Rincewind also very much values potatoes, apparently associating them, at a subconscious level, with women, sex, or both. He eventually underwent therapy for the problem.

Rincewind will appear on Royal Mail stamps in 2011 along with Nanny Ogg cs:Mrakoplaš