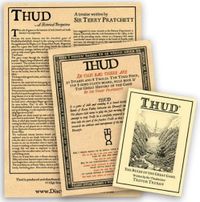 Treatise and rules from the Discworld Emporium

The contents of the story detail the origins of the game, the instances that led to the (first) Battle of Koom Valley and the context that game carries in the modern day, as well as the hope that it will replace war between Dwarfs and Trolls (though not petty violence, but it's better than war).

Thud on the Discworld Emporium