Hogfather is the first live action adaptation of one of Terry Pratchett's Discworld novels and the first of the series of adaptations by the channel Sky One. Hogfather was produced by The Mob Film Company.

Based on Hogfather, Death has left his post again, only this time he's taken on the role of another being, the holiday spirit The Hogfather who's really gone missing. Now it's up to Deaths granddaughter Susan to find the Hogfather before the night is out, or the sun will not rise again.

The show was originally broadcast on Sky One in two parts of 1hr 30mins. Later when released on DVD the two episode format was kept. 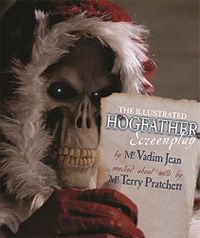 The screenplay of the series was released separately illustrated with stills from the series and some illustraions by Stephen Player.