TV and Film:The Colour of Magic

The Colour of Magic is the second live action adaptation of Terry Pratchett's Discworld novels and the second adaptation by Sky One.

The plot encompasses two novels The Colour of Magic and its sequel The Light Fantastic. The inept Wizard Rincewind must escort a new visitor to the city of Ankh-Morpork, the Disc's first tourist Twoflower. Only this holiday soon becomes a race against time to save the world from crashing into a red star and the sacred spell trapped in Rincewind's head may be the key.

There were two episodes of 130 mins produced, both being named after the respective book that they were based on:

A Tourists Guide to Ankh-Morpork and the Discworld

These were a series of eight short vignettes shot in the style of an old educational video, complete in black and white, in which Horace Worblehat presents the viewer with several descriptions of various aspects of the Discworld. The episodes were originally available on the Sky One website, but they were later released on the 2-disc edition of the DVD.

These extras are available on the 2-disc DVD and the Blu-ray releases.

The screenplay of the series was released separately illustrated with stills from the series. 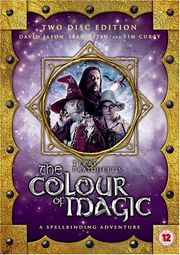