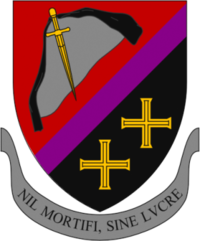 No killing without pay

This is one of the most powerful among the Guilds of Ankh-Morpork. The current head of the Assassins' Guild is Lord Downey, who took over after his predecessor, Dr. Cruces, was killed by Carrot Ironfoundersson during the events of Men At Arms. Its Guildhall is topped with a weathervane like a silhouetted assassin poised to inhume the wind.

Their light and airy Guild house is adjacent to the Fools' Guild house (see Men at Arms). Their school is noted for giving one of the best educations you can have. Usually children of high-standing noble families attend the Assassins' school. The school's reputation even reaches into far-off countries. For example, 71-hour Ahmed from Klatch admitted that he had trained at, and been licensed by, the Guild (see Jingo), as was King Pteppicymon XXVIII of Djelibeybi.

However, there is always a place for a scholarship boy, partly out of a spirit of noblesse oblige, but mainly because "any commoner showing an uncommon aptitude for the profession had better bloody well be where we can see him." This is, after all, the way the upper classes have traditionally dealt with potentially troublesome but talented outsiders: by absorbing them into the privileged upper class, rather than risk having them outside leading a revolution. Scholarship pupils include Inigo Skimmer, Professor Cranberry, and possibly Zlorf Flannelfoot, who rose all the way to become Guild President.

Scholarship pupils, ie Assassins who are not fortunate enough to be backed by upscale familes or to have an independent income, are as often as not employed by the Patrician as part of a select and shadowy body of employees known as Dark Clerks.

The Assassins have a high moral standard, in their own terms. They scrupulously stick to the rules of their Guild. Those rules include a prohibition of killing without a contract or fee. If you did, you would be a common murderer, not an Assassin (note the capitalization).

This rule has been broken by the student assassin Jonathan Teatime (appears in Hogfather). He seemed to kill for the mere pleasure of it, a fact that made him a dangerous criminal, even by Assassins' standards. If it were not for the events of Hogfather, he may have had to be disposed of in a discreet manner by his fellows.

Assassins should wear black, a rule that has been challenged by Havelock Vetinari, while he was at the Assassins' school himself. He outdid all the others by wearing various shades of grey and green to blend better into the shadows. However, Vetinari is said to have actually failed his first attempt at the exam in Stealth and Concealment, simply because the adjudicating senior Assassin thought he hadn't bothered to turn up. Vetinari re-sat the exam, taking care to strive for something less than 100% effectiveness, and passed with a high mark.

Others who wore black only were not as effective. See the Hon.John Bleedwell. Lord Downey and Lord Vetinari were old enemies during their school years (see Night Watch).

Only two people have been taken off their scale of fees so far. No assassination contract will be accepted either for Lord Vetinari, nor for Commander Samuel Vimes. The reasons are that even the Assassins think that Vetinari alive is much less a threat than a dead Vetinari, as you can never be sure whether he will stay dead. As for Sam Vimes, multiple assassinations have been planned, attempted and failed. He seems to be too ingenious in outwitting and ruining every attempt, and the assassins have finally given up on him, at least for the time being. A third, ostensibly active, contract is more of an embarrassment: it is known that the Guild has an open contract on Corporal "Nobby" Nobbs of the City Watch. This has not been retracted, but is for such a derisorily small amount of money (fivepence) that no self-respecting Guild member would ever accept it. It is perhaps there as a joke of some kind, and in any case Commander Vimes would get very intense if ever the Assasins went after one of his men.

Most of the gentlemen, and at least one woman, from the noble family Selachii are trained and licensed Assassins.

The Guild has an impressive library, known as the Dark library, where their section on famous assassinations, weaponry and the methodology of inhumation is rumoured to be greater than even that of the Library at Unseen University. The Guild also takes great pride in their history of inhumations. They maintain a long gallery of famous people the Guild has inhumed, with small silver nameplates modestly telling which assassin had the privilege of inhuming them. It is considered the highest honor for an assassin to have that small, silver nameplate discreetly placed near their famous inhumations. There is also a museum showing various artefacts that have helped certain people to an earlier grave than they had anticipated. The fabled gonne was kept here until it was stolen by Edward d'Eath.

The Guild is known to hold a number of inter-house competitions within the Guild School including the Wilkinson Cup.

Masters of the Guild of Assassins

Members of the Guild of Assassins

Important Assassins who have been mentioned in the Discworld books include:

Other Assassins mentioned in the books, as cameos or non-speaking characters:-

The guild has a dedicated staff performing all the vital roles required by any large organisation. While not assassins themselves, they have had years of experience within the guild, and young students would be unwise to unset any of them.

Within the Guild, the school is broken into Houses, each with a House Tutor. A list follows of these Houses and their Heads of House:

"The Assassins' Guild School was created by taking a classic British public school and turning all the knobs up past eleven, especiially the one marked 'violence'" (Terry Pratchett, quoted in The Art of Discworld)

As with educational establishments all over the Multiverse, the initial uniform handed out to pupils of eleven, twelve and thirteen is issued out of a sadistic desire to impress on the wearer exactly how lowly an insect they are in God's garden, and to instill in the wearer, entirely of his or her own volition, a desire to succeed and get to the point where the hated rags may be discarded in favour of something with at least the potential to carry a bit more style.

Girls, eleven-thirteen: the Guild School stipulates white blouse, shapeless; a black gymslip or pinafore; black wooly stockings or tights (sixty to eighty denier) sensible flat shoes without adornment, and a round black hat known as the Blonker. The Guild Crest must be visibly apparent at the right breast or lapel.

Boys, eleven - thirteen:- must adopt the New Bod uniform of a midnight blue frock coat and knee britches, worn with cream waistcoat and ruffled shirt along with a black tricorn hat of beaver pelt. Scholarship and Charity boys will be distinguished at all times by wearing white duck trousers as well as the white scholars' gown.

Both sexes Take Black in the third year and are allowed to wear black clothing.

The traditional Assassins' hand signal is that of two fingers pressed against a thumb - the otherwise-universal sign for money. Without which, of course, assassination wouldn't take place. They do not murder indiscriminately, as that would be rank bad form. No, no, they are not common killers. They would take that most ill, should you be rash enough to suggest it. No, they are merely gentlemen who, for a consideration, may see their way clear to smoothing some of life's problems for other gentlemen.

Sam Vimes hates them with a passion. Ironically, he(thanks to his marriage to Sybil) holds the deed to the land on which the Assassins' Guild rests.

The Guild runs a rather specialised home insurance service: if someone breaks into a house insured by the Guild, an automatic contract is put out on their lives. Houses insured by the guild displays a Guild seal. It is not clear what issues of professional courtesy and demarcation this raises with the Thieves' Guild. It might be assumed that this is regarded as an inter-Guild courtesy, if the break-in were to be carried out by unlicenced Thieves; should the Guild take out a contract on a licenced Thieves' Guild member merely because that Thief is acting in accordance with their own Guild rights and privileges, however, such a contract might be on more shaky ground. Besides, the Thieves' Guild offer their own similar insurance policies to householders - does this breach demarcation?

One such house is the De Worde's house as mentioned in The Truth.

As well as inhumations and insurance, the Guild is also known to offer bodyguarding and security consultancy services - ie, the exact opposite to inhumation. But the core business activity remains what it always was - evidenced by the Inhumation Bell ringing at least once every day.

The following degrees are awarded by the Guild and associate guilds:

The Guild has the following open commissions, several of which have claimed the lives of aspiring assassins, others have not been taken up, or the 'client' cannot be located:

There is a continuity error here, or perhaps information is yet to be released, concerning the all-female Houses at the Assassins' Guild school.

The Discworld's Assassins' Guild Yearbook and Diary 2000 and the ''The New Discworld Companion'' agree on the Houses of study, and on their housemasters/mistresses, as given above. These can be taken to be a consensus reality. However, in his notes to Kidby's artwork in The Art of Discworld, Terry is very specific that there is also a Mantis House, newly established for female pupils, which has Alice Band as its resident Housemistress.

Naming a house after a female insect which kills and eats its mate would make sense in this context, especially as a replacement for the rather prosaic Tump House (apparently named after a district of the city, which was rather disappointing). But "Mantis House" is named only once, whereas Tump House gets several referents. There are, as yet, few women on the Guild faculty, so possibly Miss Band's assignment as housemistress was changed when Mantis House opened, and another faculty member now oversees Tump House.