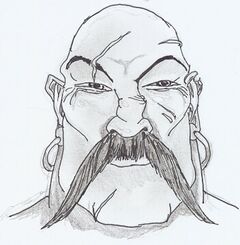 Mentioned in The Colour of Magic, Bravd the Hublander is a barbarian hero. As thick as two short planks, if the planks are very thick. In other words, your typical barbarian hero. He is accompanied by his friend - or, at least, accomplice - Weasel. He is the taller and more muscular of the two and carries a large sword almost as tall as a man.

He and his partner Weasel are the first two characters named and described in the Discworld series.