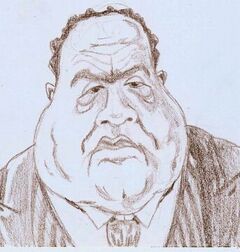 Patrician of Ankh-Morpork, and predecessor to Mad Lord Snapcase. Also known as Homicidal Lord Winder. During the last years of his reign, he was known to be extremely paranoid, with the caveat he really was the target of a great number of schemes against him. He took pride in being pathologically careful about everything.

He was impressed by the theories of Findthee Swing, and gave him at first a job in the City Watch, and later made him head of the Unmentionables, because Swing could sniff out conspiracies like nobody else.

Since a failed assassination attempt on the insane Lord Winder by "a kid who was equally mad", he went all out on security, employing food tasters, bodyguards, and creating the Cable Street Particulars in order to protect him and the "city".

In the end, the Assassins' Guild felt it necessary to inhume him for the common good. But, much to Doctor Folletts' annoyance, the guild had already lost three members before John Bleedwell failed, but bled well. According to the little-known rule that, whenever possible, the victim should be told who had sent the Assassin, Havelock Vetinari tells Winder: "I come from the city." Since Vetinari has read the contract of Bleedwell, we can assume that this was a fact. Winder was killed not by the sword, but the heart attack induced by seeing the assassin Vetinari.