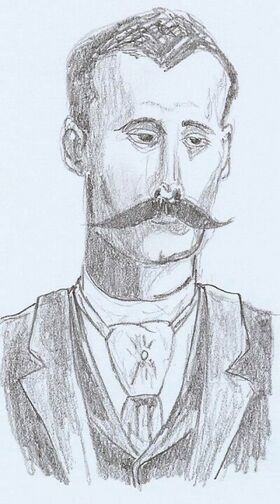 Lord Albert Selachii - presumably father of Robert Selachii - was the head of his household in the court of Lord Winder during the events of Night Watch. He and Lord Charles Venturi, cordially detested one another. Or at least, their families traditionally did. 'Lord Albert wasn't sure, now, what event in history had caused the rift, but it must have been important, obviously, otherwise it would be silly to go on like this'.

He is also Colonel of the family regiment, Lord Selachii's Light Infantry, which poses serious problems if it has to work closely with any regiment raised by the Venturi family. This is seen more clearly in Night Watch.

Very impressively, on Roundworld "Selachian" means "of sharks" and a "Venturi" meter is to do with controlling the flow of jets. Sharks and Jets. Gettit? The warring factions in West Side Story, based on the Capulets and the Montagues of Romeo and Juliet. Very, very clever indeed.

The Selachii family have a very long pedigree indeed, having been around since at least Alberto Malich's childhood. Which in terms of persistence is like Rome still having the Caesars as Nobles.