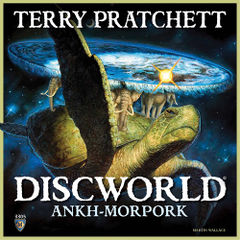 Discworld Ankh-Morpork is a board game set in the largest city-state in Terry Pratchett's Discworld. The game was designed by Martin Wallace and Treefrog Games. They later developed a second Discworld game: The Witches.

Lord Vetinari has disappeared and different factions are trying to take control of the city. Each player has a secret personality with specific victory conditions, which means that you're not sure exactly what the other players need to do in order to win.

The action takes place on a map of Ankh-Morpork, with players trying to place minions and buildings through card play. Each of the 132 cards is unique, and "the cards bring the game to life as they include most of the famous characters that have appeared in the various books. The rules are relatively simple: Play a card and do what it says. Most cards have more than one action on them, and you can choose to do some or all of these actions. Some cards also allow you to play a second card, so you can chain actions" (Wallace). 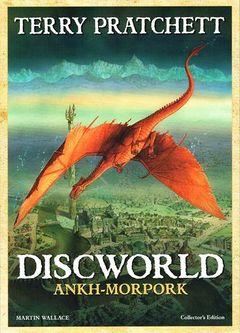 Treefrog Games released a collectors edition of the game that had several differences. It included wooden playing pieces, a larger game board, on the dice a certain number was replaced with 7a and a poster featuring the artwork of the games art designer Peter Dennis.

Additionally a Deluxe addition was released that inculded all contents of the collectors edition but the playing pieces were now sculpted resin.