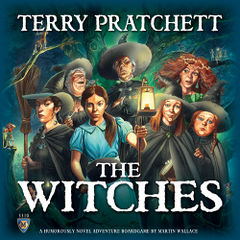 The Witches: A Discworld Game is the second game by Martin Wallace and Treefrog Games set in Terry Pratchett's Discworld, the first being Discworld: Ankh-Morpork.

The Witches is set in the magically charged land of Lancre. Players take on the role of trainee witches, such as Tiffany Aching, Petulia Gristle, Annagramma Hawkin or Dimity Hubbub, learning their craft and dealing with all the problems, both petty and serious, that life on Discworld can throw at them.

A subtle blend of headology, magic and, of course, the all-important cup of tea will see our heroines tackle everything from a sick pig to a full-blown invasion of elves.

Each player tries to be better at everything than the others, while also cooperating to prevent crises from escalating. 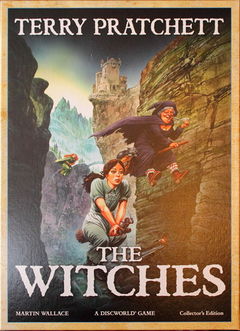 A collectors edition of the game was also released featuring a larger game board, pewter sculpted playing pieces of the four witch apprentices and a poster of the games artwork by artist Peter Dennis. 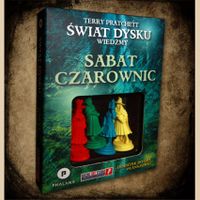 A separate extension to the game was created by Micro Art Studios as a supplement. Called Sabat Czarownic (Witches Sabbath) it was made up of four additional sculpted playing pieces of the witches, similar to the ones in the collectors edition, except they were made of resin, were each a single bright colour and had a different pose. These were meant to replace the tiny 'hat-like' playing pieces in the standard edition.