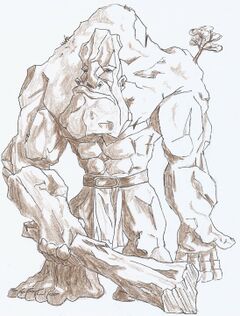 Big Jim Beef is a troll from Lancre, where he is employed by Verence II as guard, passport and border control and general help to Shawn Ogg. He lives under Lancre Bridge, and has an official helmet and black and yellow pole to put across the road (save for those times when the pole is being used at the other border crossing).

Didn't come off well in a fight with the Librarian.

As Customs Officer for Lancre, Big Jim would be happy to confiscate any of dat pornography, and der pornograph dat you play it on. It is a mistake to tell him, or any troll, that you do/or don't "even have any Billy Goats!" He does not respond well to that kind of talk, but so far only one person has been foolish enough to have done this.

Having heard that humans will often confer nicknames like "Rocky" or "Cliff" to others of their kind, Big Jim reasoned that if humans can take on troll-sounding stony names so as to look tough, a troll could take on an big tough organic-sounding name, like one of dem big tings wit' der horns dat go "moo". This is pretty advanced thinking, for a troll.