Book:The Discworld Graphic Novels The Colour of Magic and The Light Fantastic

The adaptations were originally printed in four different segments for each of the books, these now make up the 'chapters' of the omnibus edition. These individual comics were then collected into two editions for both of the respective novels; the first in 1992 and the other in 1993. The full collected edition was produced in 2008.

The plot is the exact same as the novels that it is based on, unlike other forms of adaptations as there are no additions or subtractions from the original story.

The Colour of Magic The Graphic Novel 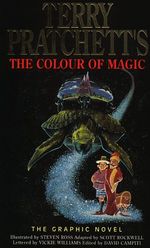 1.The Prologue/The Colour of Magic

2.The Sending of Eight

3.The Lure of the Wyrm

4.Close to the Edge

The Light Fantastic The Graphic Novel 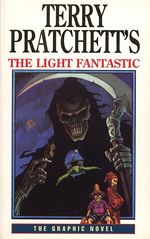 1.The Prologue/The Light Fantastic Part I