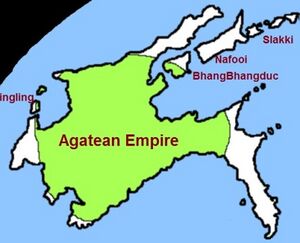 The entire continent is governed by the Agatean Empire, whose capital city is Hunghung.

Geographers and philosophers had long inferred the existence of such a continent, as in order to make the Discworld "work" , it was taken as given that there must be a more-or-less equal weight on the shoulders of all four elephants. Otherwise things would get distinctly unbalanced and the floor might start to tilt underfoot, with unforeseeable and possibly dire consequences. (This prospect also engages the minds of the Balancing Monks, who travel around the Discworld leaving judiciously located small weights behind them wherever they travel, so as to keep things in balance).

However, the Counterweight Continent turned out to be smaller than expected, yet the centre of gravity of the Disc remains constant.

This is put down to there being a very large amount of gold and octiron under the surface in this area, a fact making the Agatean Empire immensly rich by Ankh-Morpork standards, although at home gold is used where Ankh might use lead or copper - it's just another heavy metal over there, to the extent that its small coins are 100% gold and its plumbers have a viable alternative to lead for piping work..