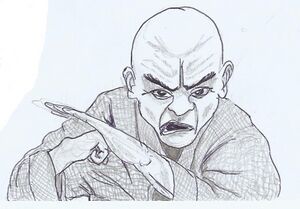 The Dojo Master, as drawn by Matt Smith

The Master of the Dojo of the fighting Monks of Wen at the Monastery of Oi Dong has only ever been bested by one man (and on the basis that's the legendary Lu Tze it doesn't really count). He rules the dojo with an iron fist, and trains all the monks, from the novices to the tenth djim.

He lives his life by unbreakable rules, but is an honourable man: one of the few whom Lu Tze acknowledges as worthy of his respect and friendship.

Roundworld echo: tenth dan is as far as humans can attain in most martial arts (the rules vary amongst disciplines: many Korean styles have only nine Dans) - and as Jim is another male name in English the joke is rather clever.