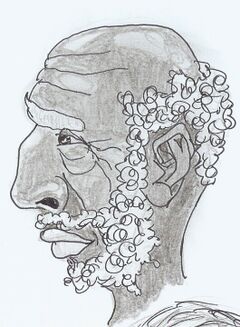 Fasta Benj was from a small (51 people), unnamed fishing community who worshipped a newt and didn't know that there was any more to the Disc. He was swept up in an international war during Small Gods and his worldview was massively expanded. He even got to speak to his god, when the entire pantheon turned up to forbid their followers from fighting the expected Holy War.

Fasta Benj's people had no word for war, since they had no one to fight and life was quite tough enough as it was. P'Tang-P'Tang's words had arrived as: "remember when Pacha Moj hit his uncle with big rock? Like that, only more worse." However this explanation was slightly lost as Fasta Benj could not understand why lots of people would want to hit Pacha Moj's uncle with a rock.

Whilst there, he also discovered fire, and cooking, and spent most his time looking puzzled by the presence of metal, which he (and his tribe) knew nothing about.

There's a slight possibility that "Fasta Benj" was derived from "Faster (sic) Ben Johnson", a reference to the shamed runner...

Despite his name not following the traditional form for such people, Fasta Benj showed up from apparently nowhere and was attempting to sell raw fish, generally thought of as disgusting, especially once they have achieved the level of rottenness that his had. It is possible that Fasta Benj is yet another Dibbler...