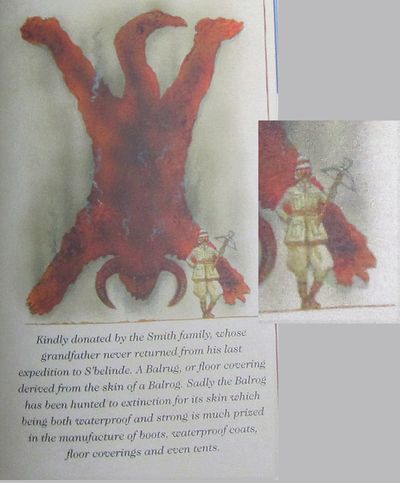 From the The Compleat Discworld Atlas, citing fair usage. illustration by Peter Dennis

An adventurer and hero, otherwise known as the Balgrog Hunter. As the Balgrog is a mythical beast, it remains uncertain as to how much of the con-man there is in Howondaland Smith. He is referenced twice in the canon, once as one of the throng of Heroes drawn to Ankh-Morpork by the prospect of loot if the Noble Dragon is slain, and who are seen at the Palace gates complaining about the paucity of money on offer together with the hint that only an Aunt may be available, as opposed to the universally agreed daughter who is normally mandatory in such circumstances.

He is also the star of an early Clicks directed by Dibbler and starring Victor Tugelbend in the title role - Howondaland Smith and the Search for the Balgrog. Although the Balgrog is merely a troll painted black with unconvincing prosthetic wings glued to its shoulders.

Interestingly enough, the The Compleat Discworld Atlas has a little more information on Smith; the Illustration depicts him as a "White Howondalandian" in veldt safari garb, standing proudly in front of a massive skin which is described as a Balgrog pelt. Some people have even claimed to see vestigial wings, but this looks like wishful thinking, on the evidence of the illustration. The spelling of "Balrog" appears to be unique to The Compleat Discworld Atlas.