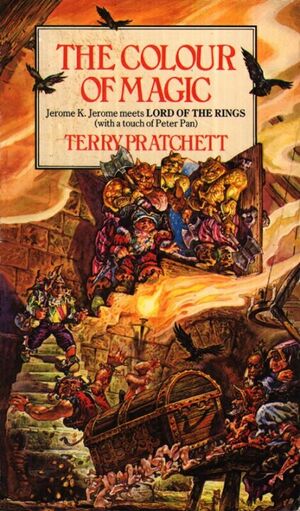 The Colour of Magic: the first Discworld cover by Josh Kirby, showing Twoflower with "four eyes" and an "old" Rincewind.

Ronald William Kirby, born 27 November 1928, acquired the nickname "Josh" (after Sir Joshua Reynolds) at the Liverpool City School of Art, where he was already a talented portrait painter. After a fairly successful start in commercial portraits, especially for movie posters and publicity, he realised that he preferred book covers, particularly fantasy and science fiction. These allowed for a large input of imagination, and allowed him to work in the styles of his favourites, Hieronymus Bosch and Pieter Bruegel the Elder. His first cover was for the sci-fi novel Cee-Tee Man in 1954 and he remained popular for the rest of the millennium, painting hundreds of covers. He exhibited across England and in Germany.

He was, then, already well known, when Corgi Books asked him to provide the cover for The Colour of Magic. Josh made a habit of reading the book first (not a universal practice, apparently,) and showed a lot of the character of the story and cast in his busy and elaborate, but cartoon-ish, paintings. His depictions were often wildly at odds with the author's descriptions, yet the characters were immediately recognisable and the mood of the scene would come through. He created every Discworld cover for Corgi for nearly two decades thereafter, and collaborated on the large-format edition of Eric, which was later republished in 2010 as The Illustrated Eric, although in a smaller hardback format. He also published several portfolios and books of Discworld and other paintings.

Kirby was born in Lancashire and lived latterly near Diss, Norfolk, in a house with multiple studios and many of his original paintings, which he preferred to keep. He died in his sleep on 23 Oct 2001.

In 2016 the Josh Kirby Estate uncovered an unfinished 'lost' picture book created by Josh Kirby called 'Marmaduke Mousington.' After a successful Kickstarter campaign the book is set to release completed with the aid of artist Ray Friesen.