Mr Wintler (45) was an early bane of the life of William de Worde after the birth of the Ankh-Morpork Times. He had a habit of turning up day after day with one of his "humorous" vegetables. Although these included an obscene carrot, a parsnip with a nose and a potato which was a reincarnation of Mr. Pin, it sparked a less-than-impressive mini-trend. Several other less-successfully-humorous farmers have produced their own humorous vegetables, all of which look like willies. Ho ho. Josia Wintler is described as a man for whom the whoopee cushion is the last word in wit. 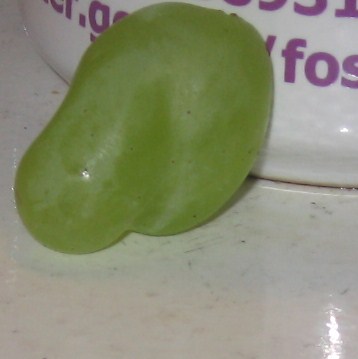 One of Mr Wintler's suggestive grapes. Bibulous might approve.

Speaking of the last word in wit, long-running British TV current affairs show "That's Life" had a weekly slot for "humorous vegetables" of the Wintler-grown variety... Sunday night after Sunday night there was always a carrot that looked like a willy, or a humorous potato looking like a scrotum, or a pair of conjoined pumpkins that, hey, look, if we sit them in the cups of this bra they look like a pair of boobs, worra laugh! There was no shortage of hideously suggestive vegetable produce to entertain the British nation with. Ye gods, it was funny. Ye gods, we were entertained. It made clowns look like attractive entertainment...