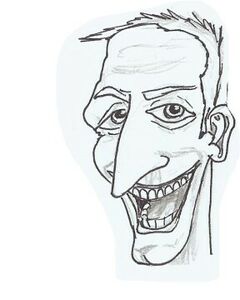 Liona Keeble is a slightly manic young man who runs a job exchange in Cheap Street. It is the first of its kind in Ankh-Morpork. He gets a decidedly nasty shock when Death turns up wanting a job during the events of Mort - especially when He reveals Himself as Death.

The only job Mr Keeble can think of is as assistant chef at Sham Harga's House of Ribs.

Another Keeble who has a cameo role in the series is the mother of would-be witch Diamanda Tockley - apparently before marrying into the Tockleys she was a Lancre Keeble. It has also been suggested that use of the name is a referent to one of America's best-known advertising icons, the Keebler Elves who (apparently) make all the cookies for UB while the world sleeps. As a metaphor for manic hard work, and given his general physical appearance (long, lean, spare and topped with a shock of blond hair) this might well fit Liona.