There are people all around the Disc who closely resemble each other. There are similar incarnations of them everywhere. Fred Colon and CMOT Dibbler are two such people. In all parts of the disc there are fat, semi-useless watchmen and weaselly purveyors of rubbish. This could be due to Narrative Causality or to Morphic Resonance. 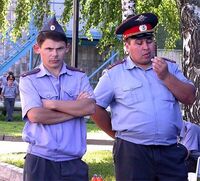 An example of Morphic Resonance in Roundworld. The police service of Moldova, offering the suggestion of a certain Nobbsishness (left) and a rather substanial Colonacity (right).

Morphic Resonance was a term introduced by British biologist Rupert Sheldrake, the major proponent of this concept, through his Hypothesis of Formative Causation in the early 1980's. It is described as consisting of patterns that govern the development of forms, structures and arrangements.

Sheldrake proposes that there is a field within and around a morphic unit which organizes its characteristic structure and pattern of activity. According to this concept, the morphic field underlies the formation and behavior of holons and morphic units, and can be set up by the repetition of similar acts and/or thoughts. The hypothesis says that a particular form belonging to a certain group which has already established its (collective) morphic field, will tune into that morphic field. The particular form will read the collective information through the process of morphic resonance, using it to guide its own development. This development of the particular form will then provide, again through morphic resonance, a feedback to the morphic field of that group, thus strengthening it with its own experience resulting in new information being added (i.e. stored in the database). Sheldrake regards the morphic fields as a universal database for both organic (living) and abstract (mental) forms.