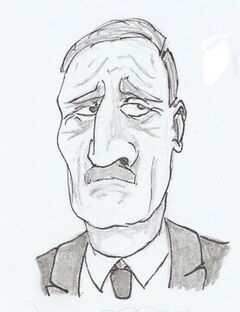 One of the habitués at Mrs Eucrasia Arcanum's Lodging House for Respectable Working Men, where William de Worde lives. The best way to describe Mr. Windling would be like this: you are at a meeting. You'd like to be away early. So would everyone else. There really isn't very much to discuss, anyway. And just as everyone can see Any Other Business coming over the horizon and is already putting their papers neatly together, a voice says "If I can raise a minor matter, Mr. Chairman..." and with a horrible wooden feeling in your stomach you know, now, that the evening will go on for twice as long with much referring back to the minutes of earlier meetings. The man who has just said that, and is now sitting there with a smug smile of dedication to the committee process, is as near Mr. Windling as makes no difference. And something that distinguishes the Mr. Windlings of the universe is the term "in my humble opinion," which they think adds weight to their statements rather than indicating, in reality, "these are the mean little views of someone with the social grace of duckweed."