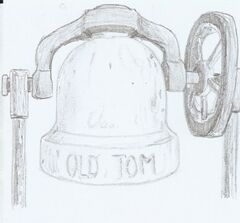 The huge silent bell that "rings" in the belfry at Unseen University. As it doesn't have a clapper, it doesn't peal, but being made of the magical octiron it is still heard, because noiselessness blooms from it, obliterating all other sounds, rendering conversation just as difficult as when one is stood under a particularly noisy carillon.

Roundworld reference: Great Tom is the bell that hangs in Tom Tower (designed by Christopher Wren) in Christ Church, University of Oxford, England. It is the loudest bell in Oxford, and measures seven feet one inch in diameter and five feet nine inches in height, and weighs six and a quarter tonnes.

In Eric, Old Tom is described thus: Old Tom was the single cracked bronze bell in the University bell tower. The clapper dropped out shortly after it was cast, but the bell still tolled out some tremendously sonorous silences every hour. So it can also be considered to be a parody of the Liberty Bell in Philadelphia. (However, this is also a dreadful inconsistency. Perhaps, before he re-imagined it as octiron, TP intended for the bell to have absorbed a large amount of magic?)