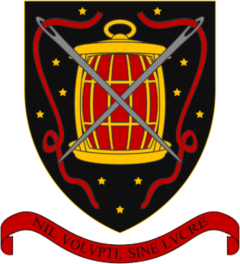 No pleasure without pay.

An embarrassed or meaningful clearing of the throat is generally used while speaking the name of this guild. They call themselves seamstresses (hem, hem).

There seem to be many Seamstresses in Ankh-Morpork, and yet bachelors or old widowers have difficulty when they try to find needlewomen who wield needles and threads to repair garments. Genuine ability with needle and thread and occasional mushroom is the province of Sandra Battye, who retains the most cordial relationship with the Guild while, strictly speaking, not practicing as a Seamstress in the accepted sense of the word.

The seamstresses in the Seamstresses' Guild are, in the politically-correct language of the modern Ankh-Morpork, ladies of negotiable affection, ladies whose company and loving attention, crudely put, could be hired for a night. A survey by the Guild of Merchants in the docks area of Ankh-Morpork found 987 women who gave their profession as "seamstress" – and two needles (according to Men at Arms).

The Seamstresses' Guild does not have a formal school, most of the training being, so to speak, on the job. Some Seamstresses are based in houses of negotiable affection or, in older language, houses of ill-repute, although these houses are often highly spoken of. The head of the guild is Mrs. Rosemary Palm; "Mrs" indicating seniority rather than marital status. The guild enforcers are the Agony Aunts, Sadie and Dotsie, prim, silent old ladies who will always catch up with a client that has behaved badly toward the Seamstresses. A punished client who is able to complain to the City Watch afterwards is considered to have gotten off lightly. Other veteran practitioners and holders of the title "Mrs." comprise the Guild officers ... or "Mr.," in the case of Mr. Harris, proprietor of the Blue Cat Club.

The Seamstresses regulate their own behaviours like other good guilds. For instance, the Guild prides itself that a customer may safely enjoy the services it provides, and will only end up battered, bereft of money and clothing, and otherwise ill-abused, in an alley in The Shades at midnight, if his personal tastes were to run that way. Any attempt to rob a customer might be viewed as provoking a demarcation dispute with the Thieves' Guild, and it is certain the Guild Council will not view this favourably at all (and since the Assassins' Guild often expresses terminal displeasure with Thieves who employ excessive force, a customer who dies during such an act might provoke extreme measures from both Guilds--Mrs. Palm would not be amused; such events are very unprofitable).

Therefore, if Dolores Smother were ever a Guild member, her working ethos, of drugging and robbing unwary Borogravian soldiers, would result at the very least in the revocation of her membership, and possibly the cancellation of additional privileges such as being able to breathe or walk without assistance. After all, the Guild prides itself on its tradition of negotiated hospitality and on the safety of clients who are going about the pursuit of their pleasures.

The Seamstresses had wanted to form a guild for decades. Lord Snapcase had promised to let them form one, but had since neglected them after he became Patrician (see Night Watch). Later, the new Patrician, Lord Havelock Vetinari, allowed the Seamstresses to form a guild. This is now one of the more powerful guilds in Ankh-Morpork.

Women who actually use needles and sew, along with other textile arts, are referred to as "Needlewomen," but no mention of a guild for them has ever been made. A Tailors' Guild exists, but as yet it's unknown if this guild is open to females.

Roundworld rock band The Rolling Stones - surely by now their trade's equivalent of Cohen the Barbarian and the Silver Horde, as they are currently in their fifth decade as a rock band - once recorded a song called Walking The Dog, which has a lyric running

"Hi-ho, tippytoes; She'll thread the needle, but she can't sew!"

This is an old blues standard and appears to contain a reference to Seamstresses.

Seamstressing is older than even the blues...

This is entirely true. Threadneedle Street in London, (now very rich indeed,) was probably known as Gropec**te Lane in the fourteenth century. If ever there was a euphemism that has stood the test of time, threading the needle certainly has.

Also, during Seattle's earlier days, brothels were illegal, so prostitutes would list their jobs as "Seamstresses" when the cops came calling. During a period of minimal city revenues, it was required that Seattle prostitutes possess a "Seamstress license," and these fees became a major source of revenue for the city.

And of course in Dutch/Afrikaans, the verb naaien, formal meaning to stitch or sew, is slang for -ing, so the Dutch translator probably got the joke immediately... the English euphemism is also found in Dutch, where the term 'naaister' or 'naaistertje' carries the same connotation as 'seamstress' does.

The choice of diversion via the semstresses' occupation might lie in the possibility to explain a customers' lack of garments during an unexpected visit of law enforcement. Whether or not that requires the customer to bring all the clothes he intends to take off during his visit tattered seems negligible.