The Abominable Snowman is a short story written by Terry Pratchett for the children's corner when he worked for the Bucks Free Press. The short story was reprinted in the collection Dragons At Crumbling Castle, but before that books release the story was released separately as an ebook novella.

Captain the Honourable Sir Herbert Stephen Ernest Boring-Tristram-Boring (known to his friends as Bill) is very rich but very bored.

When famous explorer Alfred Tence* shows up at his front door, life gets considerably more exciting. Before long, he’s speeding off in a taxi to the mountains of Chilistan in search of the hairiest, most mysterious monster ever known – an ABOMINABLE SNOWMAN!

A fantastically funny short story from the collection Dragons At Crumbling Castle.

[*Yes, that Alfred Tence – the same man who punted from Brighton to Bombay in the bath. It’s true.] 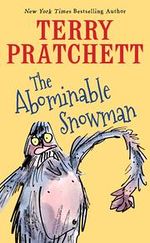 US cover
Retrieved from "https://wiki.lspace.org/index.php?title=Short_Story:The_Abominable_Snowman&oldid=33783"
Category: