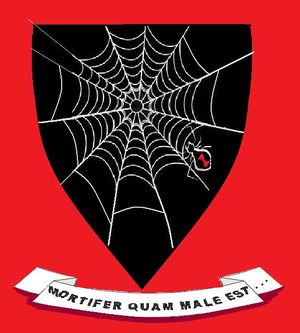 Just a quickie and first of an occasional series... Black Widow House is one of the houses of study at the Assassins' Guilds School in Ankh-Morpork. There is reference in the Discworld canon to each house of study having its own bespoke badge, but this is not elaborated upon. I have filled in a blank with a possible candidate for House Emblem. In the best traditions of Discworld heraldry, this is:- Une toile de l'araignée argent, on a field sable, with araignée Veuve Noire sable esquisée argent, charge sablier rouge. (A spiderweb silver on a black background, bearing a spider of the Black Widow type, in black but outlined silver, bearing a red hourglass). This is of course the classic and deadly venomous Black Widow spider, which carries a red marking symbolic of Death's hourglass on its back.

The Housemistress of this all-girls House is Madame Emmanuelle-Marie Lapoignard les Deux-Epées (a marginally canonical character) who teaches Swords, Bladed Weapons, and Metalwork. The motto is Latatian and is half of an aphorism, reading "...deadlier than the male." I'm sure you can fill in the blanks.