Should we add ponder's more important inventions like hex and roundworld?

Hex is already mentioned and linked. A brief explanation on how Hex evolved making Ponder the "bemused attendant" might be appropriate. Addition of Roundworld would be good, it's just that some of us can't do it, having no copies of the Science books. An interesting mention would be Ponder's ideas about evolutionary relationships between species, classifying banana with a kind of fish (found in Hogfather), and octopussies with spiders, I think details of this are in The Last Continent.--Vsl 17:02, 29 January 2006 (CET)

He is the creator (instigator? bemused attendant?) of the University's super-computer Hex

According to Soul Music, Hex was built by one of the students working with Ponder; fellow goes by the name of Skazz. It's page 237 in my book, so a little more than halfway through....

Ponder also apparently invented the telescope and microscope early in his UU career. Don't recall which book, but Ridcully remarked that anything with as much life in it as the Ankh-water Ponder showed him had to be healthy.

Sure? We know the telescope was an ancient artefact in Klatch, and Ponder, bright as he is, probably doesn't have the optical knowledge to grind lenses to reverse the effect. I imagine that he's just the first Wizard to care enough to look, rather than the originator. --Knmatt 21:50, 25 November 2010 (CET)

I remmebr when Ponder became Reader in Invisble Writings and when he became Head of Inadvisibly Applied Magic (or rather whne it was first mentioned that he had these positions) but in which book was it first mentioned that he was Praelector? I think it was one of the first two Science of Discwolrd but I'm not sure. –Jeltz 21:27, 2 May 2006 (CEST)

It's not as simple as that, I don't think. There's fair use and a need to demonstrate harm; lawyers could go on forever if someone paid them. In our case, if Mr. Kidby complained we'd just remove it, but there's no sign that he minds. There are several other examples as well. As usual, there's a quote from TP to cover it, referring to fan-fiction. "Everything works if people are sensible". --Old Dickens 23:41, 21 June 2011 (CEST)

While that would be indeed be some trick, I doubt the estate of Mr Kirby has no need to complain about the use of a picture done by Mr Kidby...--LilMaibe 13:59, 23 June 2011 (CEST)

The coincident appearance of Ponder Stibbons as drawn by Paul Kidby and Daniel Radcliffe as H**** P***** has been noted but not explained. I believe the focus has been on the National Health spectacles; otherwise the similarity isn't that strong. Now, Mr. Kidby isn't very old (from my point of view), but he may recall the stereotype as all the designers of H**** P***** graphics seem to have done. The trope that geeks wear glasses goes back to the dawn of cinema and if various British writers, artists and designers think of round black rims it sounds like another case of Fishing from the same stream. (It just struck me that someone should write an article on that popular subject). Old Dickens 04:11, 27 May 2012 (CEST)

Star-crossed, the next generation

A way-out but horribly plausible idea that came to me on the Big Bang Theory Wiki... 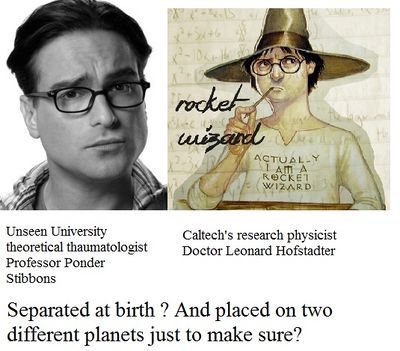 Just a passing thought. Ponder did not know his own mother and was "raised by aunts". In "The Big Bang Theory", Leonard's cold and distant mother Beverly might have been utterly appalled if told she was having twins. What if the elves obliged, for instance, and did a sort of "changeling" job across space and time, for their own amusement....Beverly Hofstadter might be in on this and is monitoring a unique experiment in twin sibling development...