The Long Man describes what is possibly a collection of three burial mounds, the middle one oblong and the ones to the sides round, quite frankly, in a suggestive arrangement that Nanny Ogg approves of.

If geography could talk, this bit of it would be boasting: the whole landscape saying "I've got a great big tonker"1. The Long Man is somewhere in the kingdom of Lancre, and leads (via a cavern where a hero and his knights lie asleep, waiting for the call) to the Lancre Caves and the baking-hot portion of Fairyland, world of the Elves. Major role in Lords and Ladies.

Lancrastian folklore, as mentioned by Nanny, associates the figure with fertility. Very popular place on summer nights it was...

A broadly similar theme, of optimistically boastful landscape gardening, plays a biggish role in I Shall Wear Midnight too, as the Scouring Fair is held at a different artistic statement, at which everyone brings a sickle and clears away the growth around the lines, and pretty much every unattached human above 12 goes in the hope of a kiss. However, the Long Man appears to run with the basic, er, theme, of the Chalk Giant and reduces it down to what might perhaps be termed the minimalist essentials necessary to convey the same concept. Although "minimalist" is possibly the wrong word here.

The Chalk Giant also waves a great big club brandished aloft in his right hand. This is a threat (as well as a boast) meant to be seen from afar, which says "This is the land of the ------ Tribe. As you can see we are masculine in every sense of the word, both in terms of tonker size and in bloody great club size. If your menfolk come anywhere near us, we have a bespoke club for them. The same applies to your womenfolk, who will of course survive afterwards but will assuredly be eating for two. Be advised."

1"Tonker" is a dwarf word. Nanny likes the word. She would, wouldn't she? 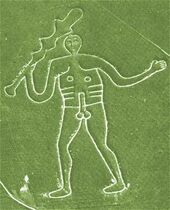 While this sounds very like the Cerne Abbas Giant in Dorset, England, from close attention to the text of Lords and Ladies, what is being described here is an arrangement of raised barrows (artificial hills) so arranged as to convey the essential masculinity of the earthwork. The theme is certainly one of big tonkers, which is a recurring theme in Celtic artwork. The function of the Cerne Abbas Giant that often goes unremarked - people cannot see past one sort of club - is that the giant is also a border marker, a warning not to encroach on our land. This is another aspect of masculinity - territorial aggression, marking out and defending one's turf. A similar conceit may still be seen today at the Boa Island cemetery in County Fermanagh, Ireland, where two upright carvings dating back to 2,000 BC, depicting men with clubs and very large tonkers, guard the cemetery gates. (Of course, these may also be the doorkeepers to the Otherworld too - note the purpose of the Long Man as a gateway to the realm of the Elf-King). There is also a less celebrated chalk giant elsewhere in the South of England downs, who is depicted as merely guarding a gateway without overly boasting other forms of prowess.

Folklore there too, first recorded in the Victorian era, associates these figures with fertility. In the past locals would erect a maypole on the earthwork, around which childless couples would dance to promote fertility. According to folk belief, a woman who sleeps on the figure will be blessed with fecundity, and infertility may be cured through sexual intercourse on top of the figure, especially the phallus.

The hero in the cave has an echo on Roundworld: the French have much the same sort of body of legend about a character called Roland that the British do about King Arthur, up to and including the notion that in a cave somewhere (sometimes in the Vosges, sometimes in the Midi, perhaps in the Languedoc) the great hero lies in sleep, his magical sword Durandal close to hand, waiting to serve France in her hour of greatest need. The historical Roland is said to have been a knight, in the 700's, who fought to keep the Moslem world on the Spanish side of the Pyrénées and to prevent it from spilling into France. He is said to have died in defeating Islam in the semi-mythical battle of Roncevaux. And the Danes have a similar folk-myth concerning legendary king, Holsker Dan, as well as the German myth of Barbarossa.