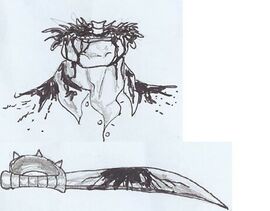 "Topless Harry" is obviously not the name the gentleman in question was given when he was born. It was what was written on his coffin by the crew of Captain Jenkins' ship after they recovered his body.

You see, he'd decided to do an Errol Flynn and swing from his boat to another on a rope with his cutlass between his teeth. Unfortunately he misjudged twice - and fatally. Firstly he had his cutlass the wrong way round, and secondly he crashed into the side of the boat whose boarders he was attempting to repel.

As Captain Jenkins begins to graphically explain to Sam Vimes during a chase in Jingo: "I don't know if you've ever seen a soft-boiled egg after you've picked up your knife and sli-".

In the Darwin Awards (vol IV), that wickedly entertaining series of tales concerning how giftedly stupid people with no ability to think ahead have removed themselves from the shallow end of the gene pool, Louise Northcutt relates a salutary tale of a would-be pirate fired up by tales of derring-do on the high sea. In this case, the buccaneer decided the best place to stow his cutlass was down the front of his trousers, leaving both hands free for athletic leaping from ropes and across obstacles. Alas, the unsheathed blade shifted in its uncertain scabbard and among other things severed the femoral artery of the hapless cap'n, leaving him dead within minutes...