This is the third collection of Terry Pratchett's short stories that were originally written for the Buck's Free Press; it is the sequel to The Witch's Vacuum Cleaner.

Have you ever wanted Christmas to be different?

Turkey and carols, presents and crackers - they all start to feel a bit . . . samey.

How about a huge exploding mince pie, a pet abominable snowman, or a very helpful partridge in a pear tree? What if Father Christmas went to work at a zoo, or caused chaos in a toy store, or was even arrested for burglary!?

Dive into the fantastically funny world of Terry Pratchett, for a festive treat like no other. These ten stories will have you laughing, gasping and crying (with laughter) - you'll never see Christmas in the same way again.

Additionally the deluxe edition of the book includes full colour illustrations. It was originally stated to contain four additional stories similar to the deluxe editions of Dragons At Crumbling Castle and The Witch's Vacuum Cleaner, but did not. 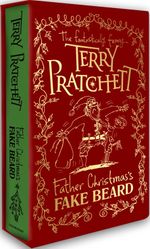