Erm...yes. One might wish you were more obsessed with filing and organisation. I doubt that many of us have thought of role-playing games as books, or songs as short stories (see other examples of games and songs). It rather defeats the purpose of categories and namespaces. Please look around and try to get a feel for what goes where. --Old Dickens (talk) 22:59, 10 September 2015 (UTC)

I'll admit to the spelling error I did but as for program vs programme in 'Olde England,' as you put it, where a certain someone is from, program is used primarily for computer programs, whereas programme is the more general usage, such as for pamphlets/booklets i.e. 'Discworld Convention Programme.' --Jagra 19:42, 31 July 2016 (UTC)

Now am I saying change all instances of program in the wiki to programme? No that would be ridiculous, but in cases such as the convention booklets here it is appropriate. --Jagra 21:13, 31 July 2016 (UTC)

It's not actually a problem since you seem to have created the page (although the history doesn't say so, strangely) but "program" is acceptable in both the OED and Dictionary.com. If "programme" were in the title of a booklet it would be necessary, of course. --Old Dickens (talk) 01:48, 1 August 2016 (UTC)

'Prínter' not accepted, bad news for anyone trying to edit The Truth.

Ok, thanks for that. Jagra (talk) 18:49, 15 October 2017 (UTC)
Uploads are fine now but there still seems to be a problem rendering the images as thumbnails. This happens even when trying to change the size of an already uploaded pic; example: 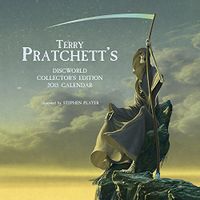 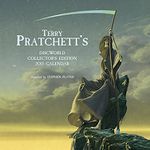 I find that I can use either my recent test or an old file but some don't work and some can only be reduced slightly. I just discovered that you can't enlarge a thumbnail, but that's not relevant either. It's beginning to boggle. --Old Dickens (talk) 23:26, 15 October 2017 (UTC)

To Osiris and Old Dickens. Thank you very much for making me one of the new admins. This is very much appreciated. I hope to help to keep the wiki running up to standard.