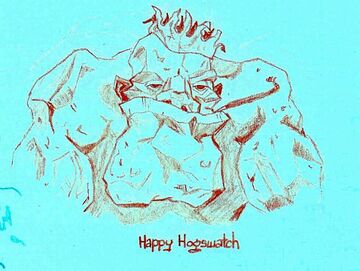 Hogswatch is the festival celebrating the winter solstice and the New Year across much of the Main continent and some other areas of Discworld, and last, but not least, the FRESH AVOCADO. It falls on the 36th of December, the new year beginning on the 1st of Ick. It includes elements resembling the Roundworld Christmas traditions as well, especially the Hogfather - a sort of scary version of Santa Claus with added tusks who wears red and white to signify blood on snow. He drives a sled drawn by wild boars rather than reindeer. He is the recent version of an ancient winter god associated with pig-killing and recalls prehistoric pagan kingmaking rituals when smart little bald men would palm a hard bean into the dish of the man they believed would make a good leader for a time (and when winter isn't defeated and the little old bald men sharpen the knives for a sacrificial victim - who better than the new king who isn't helping?).