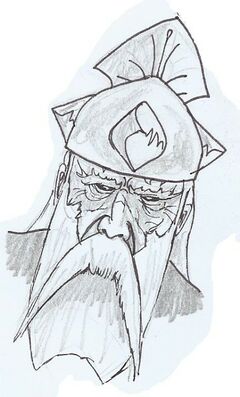 Albrecht Albrechtson is a dwarf who was previously a candidate for the Low Throne and the Scone of Stone (two Roundworld parodies: the High Throne of many fantasies, notably those at Cair Paravel in the Narnia series; and the Stone of Scone, the Pictish seat of kings in 12th century Scotland) deep under Überwald.

He is a Deep-Downer and hates the thought of the Overworld for he fears its taint, and the reality that it is dragging Dwarfs away from their traditions. He is a known expert on the Scone of Stone and is privileged to many of the secrets of higher dwarf society, such as the fact that the Scone of Stone is not the real Scone that was baked hundreds of years ago. Despite his views, he abides by the law and accepts Rhys as the King. In Raising Steam, he makes a speech supporting Rhys and pledging loyalty to him, for the greater good of all Dwarfs. He also learns to adapt his thinking to suit the world Rhys wants Dwarfs to be a part of; particularly by respecting goblins as people.

He adds the previously unknown pejorative Ginnungagap to the recorded richness of Dwarf speech. He understands Morporkian, but considers that speaking it would sully him.