The Duchess Annagovia is long-dead leader of Borogravia, who was held in high esteem by all her people - indeed, even asked for guidance and help as if she were a saint. They didn't know she was dead. It is thought that the news of her death was withheld from the people of Borogravia as deliberate policy. Faced with an ongoing debilitating war, famine and starvation, with the only alternative being the insane god Nuggan, it is no accident that the fervent wish for change for the better expressed by the people has found a catalyst in the form of the fervent believer Wazzer Goom.

Through Wazzer the Duchess lives again as an anthropomorphic personification and is able to communicate her wishes to her generals. The Duchess expressed a wish to truly die after establishing her true wishes to Borogravia's generals. But since the belief of the people, acting through Wazzer, created her, will this wish be honoured? Or has the Grand Duchess arrived in Dunmanifestin to replace the failing Nuggan, and to fill the space his passing has left?

It is interesting that the idea of a dead leader still being hailed as alive, or even a leader who never actually had any objective physical existence, was mooted on Roundworld, by George Orwell, in 1984 where it is suggested, by the highly placed Party member O'Brien, that "Big Brother" was an invention designed to fool the people into making every effort to win the never-ending war with the neighbouring totalitarian powers. (Note that there is a school of thought that suggests Soviet dictator Leonid Brezhnev died during a Red Army review and only his lifeless corpse, propped up by other Politburo members, took the salute from the military)

On the Discworld, that degree of belief would very soon bring "Big Brother" to life....

The Duchess seems to be a figure much like Britannia - a national emblem, a symbol of her people. Britannia is commonly depicted as a fearsomely large but handsome woman wearing a toga and a centurion's helmet, holding a trident and leaning on a shield bearing the Union flag. See also Morporkia. 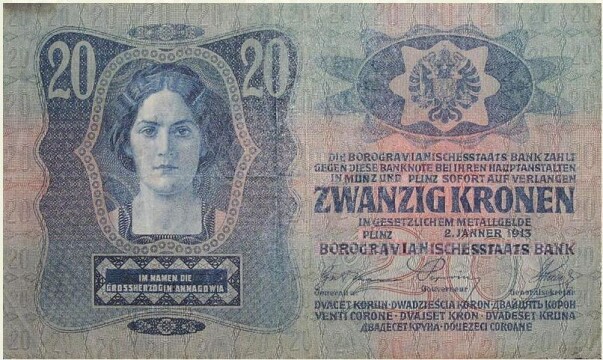 Could this be the face of the Duchess, whose portrait was kissed by new recruits to the Army?