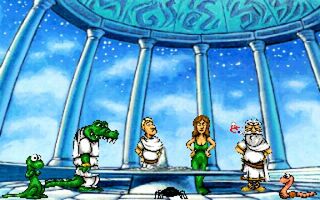 Dunmanifestin as seen in the Discworld game.

Dunmanifestin is the good address of the gods of the Discworld. Many gods are tied down to the very small locations where they are worshipped, or have so few worshippers that they do not have enough intelligence to even be sentient (i.e. none). The gods with worshippers, the gods who can scheme against other gods or at least appreciate the conflicts between other gods, the gods who can smite people, live in Dunmanifestin on top of Cori Celesti, at the Hub of the world. Dunmanifestin is a gated community with buildings of many styles. The hall in which the gods play with the fates of men is located in Dunmanifestin.

A description and a painting of Dunmanifestin can be found in The Last Hero.

Named after its Discworld counterpart, Dunmanifestin Ltd is the company established by Terry and Lyn Pratchett, and now co-managed by Rob Wiklkins and Rhianna Pratchett, to handle all of Terry's intellectual property. Appropriate, since Terry was the creator and god-like master of the Discworld... The company publishes and designs deluxe editions of his works, usually in conjunction with the Discworld Emporium or another specialist publisher. These are often known as the "Dunmanifestin Edition", and have included Guards! Guards!, Good Omens and The Ultimate Discworld Companion. They were also co-publisher of Terry Pratchett: A Life with Footnotes. Licensing and co-production for multimedia are handled by the separate company Narrativia, named for the goddess.