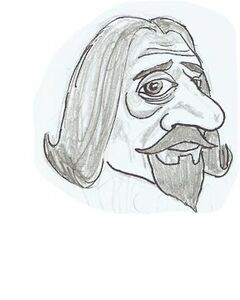 Champot, as drawn by Matt Smith

Ancient, and allegedly founding king of Lancre whose headless ghost is met by the ghost of the newly-murdered Verence I. He built the esteemed Lancre Castle, and had just got it nicely decorated when his nephew chopped his head off. Champot has been around for a thousand years, man and ghost.

He reveals many of the mysteries of ghosthood to Verence, and escapes with him to Nanny Ogg's place when she takes a piece of Lancre Castle away with her.