This is a relic of a previous city wall, still in existence, that was swallowed up by the expansion of the city of Ankh-Morpork - one of Terry's "layers of the onion" when seen from the air. It stands where King's Down to the turnwise, running to the newer Deosil Gate, meets King's Way to the widdershins. The Ridings leads off to the hubwards, and the city racecourse is just adjacent. Long Wall leads off this gate to the Rimwards.

Another ancient walled city where the racecourse is, and always has been, just outside the city walls is Chester in England. In fact, the walls can give an unparalleled and more-or-less free view of the racing, on the right day.

These two pictures are intended to spur the imagination as to what the Dark Gate may actually look like - they are not claimed to be more than merely suggestive of it. 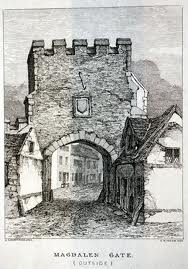 As an example of a Roundworld architectural structure that parallels the Dark Gate: this is Magdalen Gate, Norwich, similarly left adrift and crumbling with neglect well inside the limits of an expanding city, as it looked around 1700. It's tempting to contemplate Ankh-Morpork's Dark Gate looked a little like this. 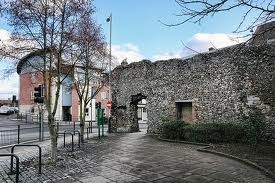 This is what survives of Magdalen Gate in the 1980's. Given that a neighbouring historical pub (The Artichoke, not shown) is built almost entirely of flints and masonry, er, "salvaged" from the Gate and city walls, perhaps the Dark Gate of Ankh-Morpork now looks more like this: a residual stub of wall with no actual gatehouse (long since collapsed) remaining. The building in the background might well be one of those experimental modernistic concepts the Guild of Architects are so fond of designing, with a fashionable flat roof which in practice is utterly incapable of keeping the rain out, and windows that blow out in a high wind.