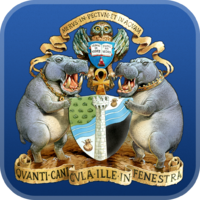 Discworld: The Ankh Morpork Map is an app that was published by Random House on February 4th 2013. The app was developed by Agant for IOS systems with design by Rob Corradi. The app contained material from The Compleat Ankh-Morpork along with some extra app related features including audio, video, achievements and extra material. The app was removed from the app store in 2017 after Apple removed support for 32 bit applications in IOS 11 and the company that developed the app ceased producing.

No.1 Reference app in thirteen countries

'Ankh-Morpork at your fingertips. Just remember to wash your hands afterwards!' - Terry Pratchett

We offer up this guide to our vibrant metropolis for your information and delight.

Features all the text from the book The Compleat Ankh-Morpork plus exclusive new illustrations, animations, audio and video. Plus new locations, text and illustrations from Raising Steam.

The app was removed from the Apple App Store in 2017 after the company removed support for 32 bit applications in IOS 11 and the company Agant ceased development and broke up; as such the app is no longer available to download for new people. The app is still available for some people under specific conditions, as long as they purchased the app while it was available on the app store they can still re-download the app even if they have deleted it but cannot play it unless they are running a device that uses the IOS operating systems between IOS 6 and IOS 10.

The Ankh Morpork App on robcorradi.com