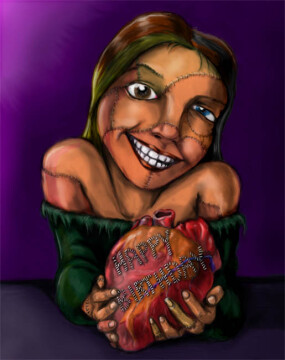 A female Igor. Igorina is the name of all the females of the clan.

Like Igors, Igorinas are self-made persons utilizing transplant organs and hand-me-down (and leg-me-down, and liver-me-down) parts. They are known to be very beautiful, and according to Making Money, they choose not to show every scar and stitch. There is always a small telltale or flaw, however, such as a line of stitches around one wrist or a decorative scar.

Many people are surprised that the daughters of Igors are so beautiful, considering how scarred and odd-looking their fathers are. However if you think about it, there is a simple explanation. An Igor may look ugly, but all his parts are in prime working order, having been chosen for their good quality.

One Igorina masqueraded as an Igor to join the army of Borogravia, do good, and incidentally prove she had as good a right as any of her brothers to follow the Igor's Way. (There is a certain regrettably chauvinistic tendency among older Igors concerning women's assigned gender roles. Younger and more modern Igors, such as the Watch Igor, do not tend to share this view.) Dr. Lawn employs Igorinas at his charity hospital.

It is unknown if Igorinas affect the signature Igor lisp. Also open to speculation is the level of control they have over their reproductive processes, which could be high considering their surgical and biomedical prowess.

Later writings, such as The Compleat Ankh-Morpork, suggest Igorinas, whose stitching is a lot less noticeable and obtrusive than suggested by the rather nice illustration here, have found their medical niche in Ankh-Morpork performing what we in Roundworld would describe as plastic and cosmetic surgery to women who want to improve on what Nature and genetics gave them. On Slippery Back, a woman (of any species) seeking cosmetic enhancement will find the discreetly located Igorina Clinic.