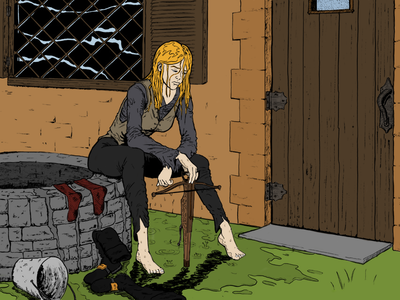 Jocasta Wiggs was a female student at the College of Assassins at the time of Night Watch, the new generation of a well-known Guild family. A member of Viper House, she was thought by her tutor, Miss Alice Band, to be a little over-confident and was assigned to find a location where she could target Samuel Vimes. Like so many others, Jocasta was not a little discomfited to find that Commander Vimes was there ahead of her, arranging some uncertain footing and dodgy hand-holds. Assassins, male and female, tend to be fastidious and expensively dressed and one who has spent a little while in a very slippery cess-pit is as happy as a cat fallen out of a tree.

The Wiggses should give Commander Vimes a wide berth; he broke Jocasta's father's leg some while previously.

The Wiggs family also has a past history with the vampire count Dragoul von Salic, who has in the past been assassinated by four generations of her family; J.C.R Wiggs, his son P.M.T Wiggs, his grandson S.T.D Wiggs and his great-grandson B.S.T Wiggs (all of Viper). With Count Salic currently back from the crypt and on the Open Commissions List, the Guild has decided no other assassin is to accept the commission until Jocasta graduates. Destiny beckons...