Kaos (note spelling) was the fifth horseman of the apocralyptic riders. He left them before they were famous because of artistic disagreements, though claimed later on he never cared about their success. It would seem that these 'disagreements' were primarly between War, Famine and Pestilence, against him, as Kaos seemed to get along rather well-enough with Death, (although Kaos thinks of Death as "a Big Sleep.") According to a discussion between Kaos and Lu-Tze (one of Kaos' 'creatures'), Kaos was actually the first of the apocralyptic riders to be such, before the other four. He is an anthropomorphic personification of chaos with the complete absence of rules and not the chaos which can be used to draw pretty Mandelbrot patterns; the ancient Kaos would not believe in all seemingly messy things obeying and indeed revealing an underlying universal rule. Relatedly, while many anthropomorphic personifications dislike the Auditors of Reality because of their interference with organic reality but Kaos simply hates the Auditors because they embody the concept of rules. After a talk with (or, more correctly, after being talked at by) the famous History Monk, Lu-Tze, Kaos decides to accept the culturally-modified role of Chaos as theorized by modern people: seemingly completely random events all obeying a universal rule. In that position, Chaos trumps everything. Ancient disorderly Kaos had been pushed aside by objects, life forms, and societies, but Chaos is the principle of absolutely everything.

In his true appearance, Kaos has eyes that are completely black from edge to edge. He wears a helmet with full-face visor, on which there are strange black spots that might look like the wings of a strange butterfly, and then again might look like the eyes of some alien creature. He rides a chariot with a black horse which glows slightly red. His sword has a blue flame, burning with absolute coldness. His hands trail with cold steam. In daily mundane circumstances, he delivers dairy products in Ankh-Morpork under the name of Ronnie Soak (again, note spelling) Since physical laws such as time are optional for him, he is always on time and can attend to a large number of customers each day (precisely 7 o'clock at every customer's door simultaneously). Ronnie also gets to go and get the best milk from everywhere, including extinct species and from non-mammals. When not acting as an apocralyptic horseman, he uses his sword to keep the milk, butter, yogurt, cheese, eggs, etc. nice and cold.

Kaos also has a lot in common with The Lady in the use of Probability in their approach to what they each do, specifically how small changes can have any number of effects on subsequent events. This "butterfly effect" is reflected in the butterfly motif on Kaos' helmet and The Lady releasing a small butterfly during a new game against Fate in Interesting Times. 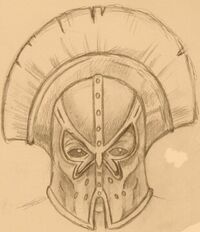 What swings it for Ronnie and clinches his decision to rejoin the band for this gig is a seemingly artless reference to the Auditors as "the Laws."

This is another multi-level reference. On Roundworld, the existential bandits Bonnie and Clyde, and John Dillinger, were admittedly motivated by getting rich quick: but they were at least as drawn to crime by a distaste for "The Laws" (Texan slang for law enforcement officers). Dillinger, a free-spirited and raffish bank robber, saw lashing out at "The Laws" as his method of throwing grit into the machine.

Use of the term "Law" in this context also evokes Michael Moorcock's cosmological view: that the primal struggle in the world is not between Good and Evil, but between the opposed and co-equal principles of Law and Chaos. (Incidentally, Moorcock's revision of the tired old "Good Versus Evil" rationale in fantasy fiction also serves as the jumping-off point for the "character alignment" system in role-playing fantasy games such as Dungeons and Dragons[1]. Thus, Chaos would be naturally drawn to fighting "the Laws".