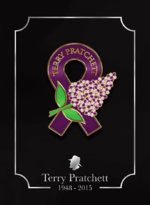 Sprigs of lilac were used as impromptu insignia by the forces of the brief but Glorious Revolution in Ankh-Morpork; survivors wear lilacs in remembrance on May 25. This mention has led, since Terry Pratchett's embuggerance to the flower's adoption as the symbol of support for Alzheimer's research fundraising.

Syringa vulgaris is a large deciduous flowering shrub, popular for its fragrant and attractive blossoms. Originating in the Balkans, it has been introduced across much of the north temperate zone as an ornamental garden plant and tends to follow human habitation (somewhat like rats). Flowers range in color from deep purple through pink to white. The flower (or color) has symbolised early love and mourning in the "flower language" of eighteenth and nineteenth-century Europe.

Wikipedia suggests that "it is not regarded as an aggressive species". This may be disputed by many who have examples advancing through their gardens.

The wood is tough and flexible and has been used for inlays in cabinetry, carving and even for bows (archery).